Divisiveness and polls: Takeaways in US, India 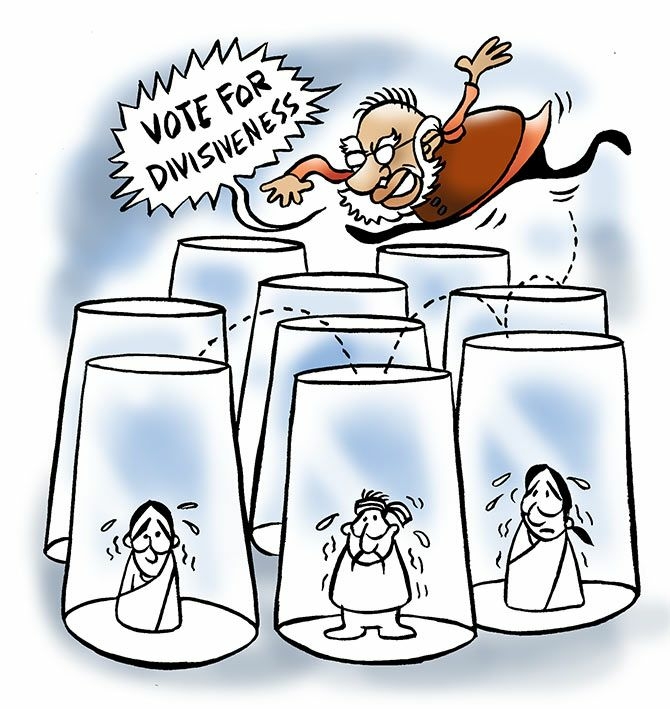 America’s mid-term elections arouse global interest as the US President’s capacity to mould domestic policy and conduct diplomacy and war abroad can be constrained if the Opposition obtains control of even one House of Congress. Being in the United States, as I am currently, allows the viewing of intensive television coverage. The results arrive in phases as the polls in the western states lag due to America’s multiple time zones. The significance this time was even greater as President Donald Trump, having rewritten the rules of domestic politics, was on test. The Economist wrote before the November 6 election that Mr Trump was “wilfully divisive” and, what is more, wallowed in it. As a result, politics as “compromise”, on which rests democratic functioning, gets vitiated and becomes impossible.

The same ailment afflicts Indian politics under Prime Minister Narendra Modi, as his BJP prepares for the electoral contest in crucial Hindi-belt states. Mr Trump’s campaigning exploited the fears of his core white constituency by hyping-up a “caravan” of unarmed Hispanics moving from Central America to the US border, almost as if the US was under invasion. Troops were promptly deployed. Mr Trump also refused to accept that his divisive rhetoric may have caused attempted bombings of perceived anti-Trump media and Democratic leaders as indeed the carnage at a synagogue. The BJP analogously first exacerbated gender and communal divisions by opposing the Supreme Court’s lifting of the ban on women of menstruation age praying at Kerala’s Sabarimala temple. After that, it confronted the Supreme Court over the Chief Justice postponing the hearing of the Ram Janmabhoomi case to January. His predecessor had ordered day-to-day hearings. The Opposition had then felt the court was bowing to the political necessity of the ruling party. The BJP spokespersons are no longer sticking to their traditional line that the BJP would abide by the Supreme Court ruling. The new, more provocative, line is that the Ram Mandir would be built “there only”, implying that it would be irrespective of the court judgment.

The issue, therefore, is whether in the United States, the oldest and most powerful democracy globally, or in India, the most populous democracy, elections can be won by divisive rabble-rousing, unlinked to governance and economic performance. The US election shows suburban voter fatigue with divisive baiting of the “other” by President Trump. They would rather instead hear about economic issues affecting their daily lives. Mr Trump is, however, seeing the glass half full as Republicans have in fact increased their control over the Senate, besides winning key gubernatorial fights in crucial states like Florida and Texas. But the House of Representatives, now firmly in Democratic hands, controls fresh legislation, besides having the power to launch impeachment proceedings against public officials. The Economist has argued that President Trump requires serious congressional oversight, which his own party has been remiss to undertake. This could include scrutiny of the Trump family’s conflicts of interest, Mr Trump’s taxation sleights of hand, his relations with Russia and the Saudi and Gulf ruling families, etc. In India too, the Narendra Modi government’s opaque decision-making is finally being questioned by the Central Information Commission and the Supreme Court. Regrettably, the Indian parliamentary committees lack the teeth and the will to be effective watchdogs.

Iran, China and the GCC members would be analysing how the electoral outcome impacts their strategic options. In the case of Iran, comprehensive US sanctions were unleashed on November 4. A weakened Mr Trump may embolden Europe to defy US pressure and continue to trade with Iran to retain both marketshare and influence in Tehran, which otherwise would pass on to China and Russia. It would also buy weakened Iranian President Hassan Rouhani some leeway. China has been at the receiving end of Mr Trump’s trade tariffs that are starting to slow down the Chinese economy and disrupt some supply chains involving hi-tech components. President Xi Jinping will meet Mr Trump later this month on the sidelines of the G-20 meeting. Mr Trump, behaving as if he has faced no setback, may cut China slack and accept a less than optimally advantageous deal. Mr Trump is, in fact, already framing even his setback as mere propaganda by his opponents.

Mr Trump’s electoral magic relies not just on trawling traditional hostility of conservative voters towards African-Americans, Muslims, Jews and immigrants but his ability to tap into the more nebulous feeling of marginalisation and threat to American lifestyles. Similarly, in India, the BJP under Narendra Modi attempts to harness the majority community’s feeling that earlier governments had “appeased” the minorities, illegal immigrants, etc, at their cost. Right-wing politicians worldwide rally support by targeting the “other”. The same toxic anti-immigrant Islamophobia has undermined even leaders like German Chancellor Angela Merkel, after 13 years in power.

The checks and balances in the US system have finally kicked in to restrain a President who has debased the media, bludgeoned his own party into submission, loaded the Supreme Court with a conservative majority and treated all political opponents as enemies to be vanquished, not engaged. India’s Westminster form of government unfortunately has weaker balancing institutions than those of the US. Separation of powers between the executive, legislature and judiciary is not as ironclad as under the US presidential system. A strong Prime Minister with a sweeping majority in the Lok Sabha can reduce Parliament to insignificance, as has happened in the past four years. The media has largely prostrated itself before the executive. Lord Acton’s dictum about absolute power corrupting absolutely should be a warning for the small coterie around the Prime Minister which controls most decision-making.

Like in the US, the recent Karnataka byelections indicated public unease with the current state of affairs. The coming Assembly polls in several states will clarify further whether “Sabka saath, sabka vikas” has been more slogan than reality. The Ram Mandir and the Sardar Patel statue are no substitute for Ramrajya, or perfect governance.

Narendra Modi campaigned in 2014 promising a Gujarat-model Ramrajya for 21st century India. He now offers Ram temple and a statue of Iron Man Sardar Patel. In the US, an unrepentant Donald Trump rants at a CNN correspondent and warns that he will retaliate if investigated by the Democratic-controlled House. Not a great Diwali for India and the world!