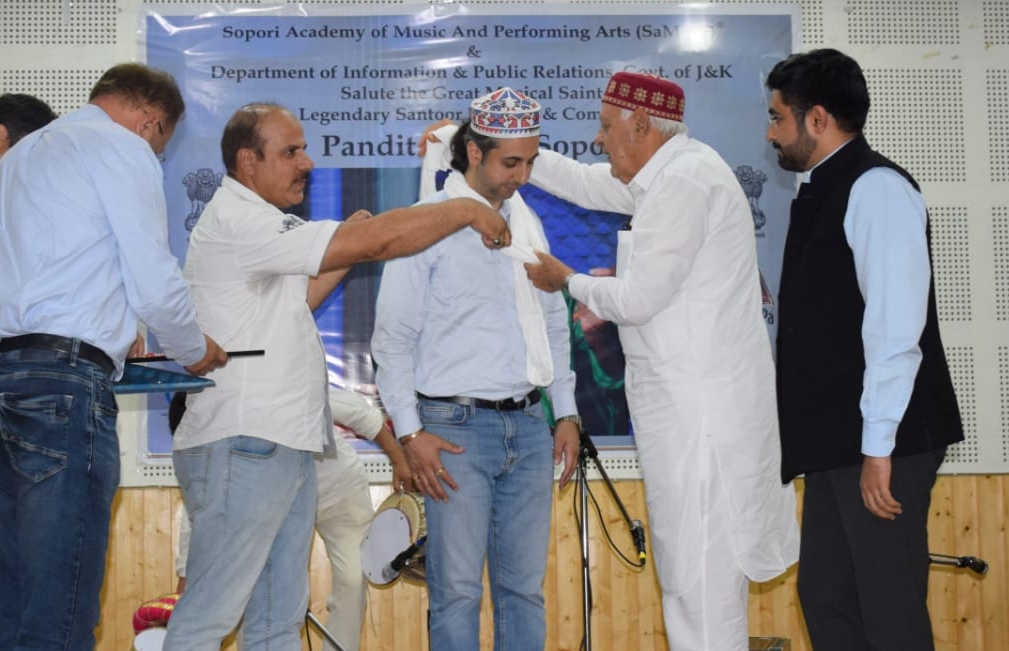 Speaking on the occasion, an emotional Dr. Farooq Abdullah highlighted the remarkable achievements and contribution of Lt. Pandit Bhajan Sopori in the Art and literary world. He remarked that the artists of Kashmir are very talented and need proper platforms to showcase their talent.

Dr. Farooq further impressed upon the Artists of Kashmir valley to help one another and work as a family. He also asked them to establish a Corpus fund among their circle so that in case of exigency they can help one another.

On the occasion, Dr. Farooq Abdullah also announced Rs. One Lakh from his salary and Rs. Five Lakhs from MPlad fund to SaMaPa.

The Director of Information assured the artists that the department would do everything possible for their welfare and upliftment. He asked them if they would find the department more than willing to promote them, especially providing the necessary platform to our budding artists of J&K.

Labroo stated that artists of the stature of Pandit Bhajan Sopori never leave earth as they continue living in the hearts of their admirers. He made out that nothing would suffice as a tribute to this Saint of Santoor who left for heavenly abode recently.

Speaking during the tribute, Abhay Rustum Sopori, son of Late Pt. Bhajan Sopori said that everyone is feeling a personal loss with the death of my father and this is one of the great tributes to my father as it depicts the love and admiration he had across the length and breadth of J&K. He added that the assembly of so many known artists and musical maestros of Kashmir today for the tribute of my father depicts the contribution of my father for the art and culture of Jammu and Kashmir.

An emotional, Abhay Sopori on the occasion assured the legendary artists of Kashmir that he will carry forward the legacy of his father and fulfill the dream of his father to contribute to the Art and Culture of Kashmir for which it is known across the globe.