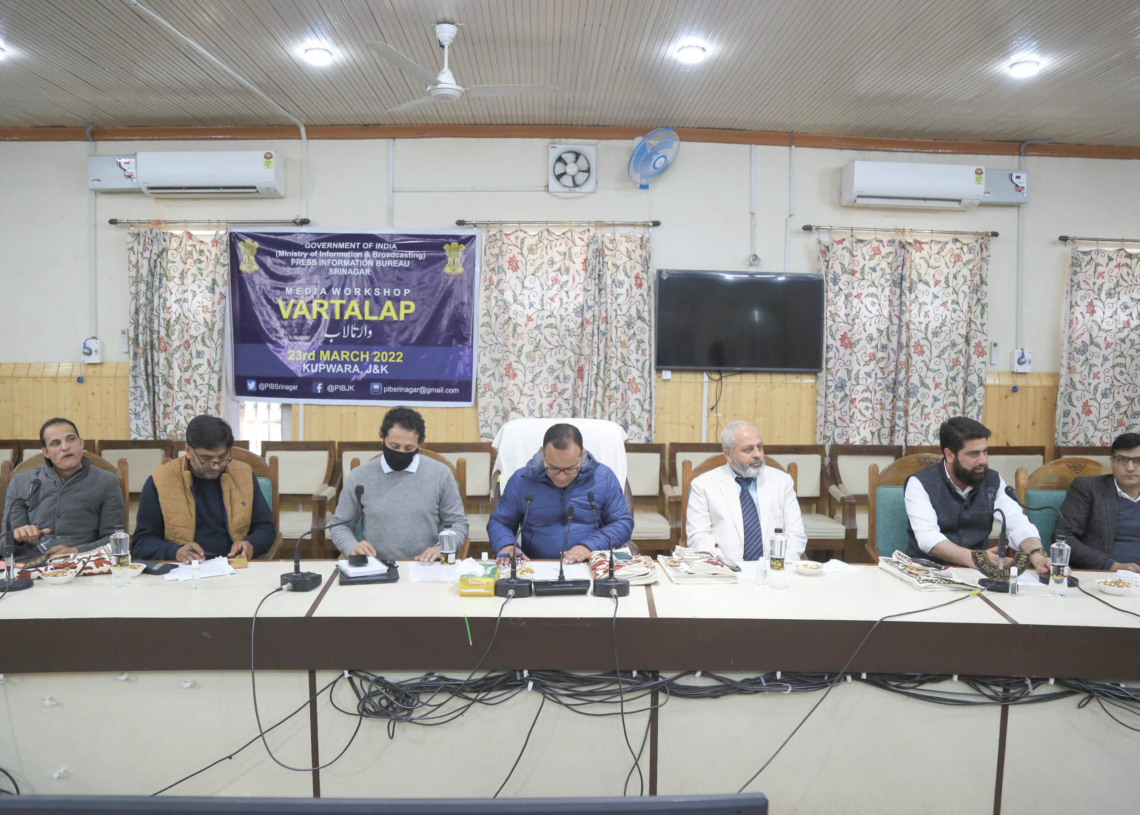 Kupwara, March 23: Press Information Bureau (PIB) Srinagar organized a one day Media Workshop to bring  awareness among people about different government-sponsored schemes and to inculcate a sense of developmental journalism

The workshop focussed on sensitization and capacity building of journalists from Kupwara and Handwara about various Centrally Sponsored Schemes and the role of media in developmental journalism.

The programme was conducted in collaboration with the district administration and included about 50 eminent media persons and other administrative officers. Media persons hailed the efforts of PIB for organizing such a program.

In his inaugural address Additional Deputy Commissioner, Ghulam Nabi Bhat laying emphasis on fact-checking before reportage said that journalism has historically changed the perspective of people. He said that there is a need for constructive criticism to bring sociological transformation. “Negative news spreads at an alarming rate, so it is mandatory for a journalist to check facts properly before reporting,” he added.

Addressing the participants Deputy Director, Press Information Bureau, Ghulam Abbas highlighted the role of PIB and presented a detailed overview of the aims and objectives of the workshop. He stressed upon the media fraternity to highlight developmental initiates on a priority basis. “Government has schemes and initiatives for all walks of life and it is the responsibility of the media to highlight these initiatives for maximum utilization,” he said.

Abbas congratulated the media fraternity and district administration for working in sync towards the development of the frontier district.

Speaking on the occasion, Media and Communications Officer PIB Srinagar, Majid Pandit said that media acts as a direct link between society and administration and there is an urgent need to strengthen this link. Emphasizing the need for developmental reporting, he said that the media should play an active role in bringing about awareness for the holistic development of society.

On the occasion News Editor, All India Radio Ishfaq Shah spoke about the impact of mass media to ensure development through communication. News Editor Doordarshan Kendra Srinagar, Shabir Dar spoke about the need for developing synergy between administration and people during challenging times.

Chief Education Officer, Kupwara A. Hamid Fani presented a detailed overview of the educational scenario of the District. Senior Journalist Syed Ishfaq spoke about developmental communication through vernacular media to reach out to the grassroots. Media and Communications Officer PIB Srinagar, Muzafar Wani briefed the participants about media ethics to maintain the standards of objectivity.

The lectures were followed by interactive sessions in which participants put forward their comments and observations with the experts. Media persons expressed their intentions for more such programs in the future.