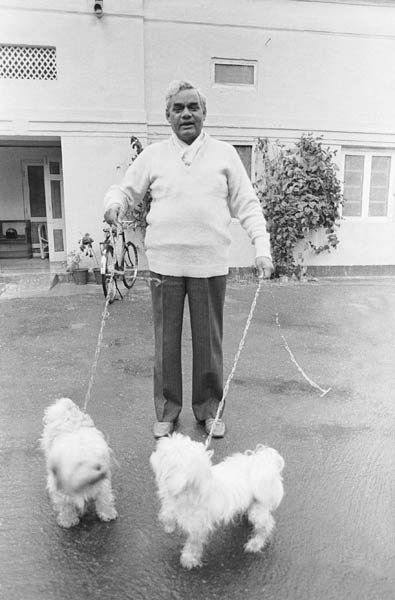 In my relatively short but intense association with Atal Bihari Vajpayee, three things left a deep imprint on me. For a political leader of great eminence, he was unbelievably humane. Power leaves corrosive marks on most politicians, including those who are otherwise humble and down-to-earth. But here was the prime minister of India who treated aam aadmi and khaas aadmi alike — the same humility (genuine, not put on for show), the same soft-spokenness, the same heart connection. There was never even a trace of arrogance in his conduct.
Also, for a leader occupying the highest seat of power, he made no distinction between people on the basis of “are you with us or against us?” Making such a distinction was insulting to a democrat. And Vajpayee was a quintessential democrat in the Nehruvian mould. It showed in the way he conducted himself in Parliament. He had a remarkable ability to reach out to people across the ideological, political, and I should add, the religious divides. For a leader of a “Hindu nationalist party”, the number of Muslims who admired him was a testimony to his “insaaniyat” (humanism).
No wonder, a hopeful phase in India’s peace process in Jammu and Kashmir was when he used the magical word “insaaniyat” on his first visit to the Valley after becoming prime minister. The question journalists put to him was: “How would you solve the Kashmir issue within the framework of the Indian Constitution?” Pat came the reply: “We shall solve the Kashmir problem within the framework of humanism.” Many politicians had earlier spoken about applying a “healing touch” to the wounds of Kashmiris. Vajpayee had done so with a single, simple, straight-from-the-heart statement. This is how statesmen are made. Prime Minister Narendra Modi has used the same word on several occasions in the context of Kashmir. But the effect has not been the same. Part of the reason, I think, is that humanism was intrinsic to Vajpayee’s personality, manifesting itself in both his personal (micro) and political (macro) interactions.
The second trait that impressed me, and often amazed me, was his non-ideological (in the narrow sense of the term “ideology”) persona. If there was one core belief that he expressed with all the strength at his command, it was that India’s vastness and the depth of its socio-cultural diversity defy any ideological straitjacket. While he was one with his party in disapproving the political use (and misuse) of “secularism”, he had a healthy skepticism towards the concept of “Hindutva”, which had begun to animate BJP politics in the mid-1980s.
I remember one interaction vividly. After the BJP’s defeat in the 2004 Lok Sabha elections, there was a “chintan baithak” in Goa. Senior party and RSS functionaries were examining the reasons for the party’s unexpected setback. Many believed that the Vajpayee government’s weak commitment to “Hindutva” was the main cause. During tea break, when I was alone with him, I was startled to hear him ask me, “Yeh Hindutva kya hota hai?” (What does Hindutva mean?) There was sadness in the way he asked the question.
As prime minister, he had embarked on a bold experiment, far removed from the divisive and debilitating constraints of “Hindutva”. To him, the National Democratic Alliance (NDA), a coalition of over a dozen political parties headed by the BJP, was “the political expression of the unity of India which respected the regional, religious and other socio-cultural aspirations of its diverse constituencies”. He had no use for any ideological construct that alienated any section of the Indian society. This apparent eclecticism had nothing to do with political expediency. Way back in the 1960s, one of his good friends in Parliament was C N Annadurai, the legendary DMK leader who had once led a fierce anti-Hindi agitation. Vajpayee genuinely believed that even a small party of one or two MPs, representing a minority community in the Northeast, needed to be heard in New Delhi. This was his way of being loyal to India’s basic constitutional values. Not surprisingly, Vajpayee became the most respected figure across India’s political and ideological spectrum.
The third characteristic of Vajpayee’s personality and politics was his ability to take a holistic view of things. He would tell colleagues during inner-party meetings that they should learn to look at problems, especially big problems facing Indian society, not in parts, but in their totality and integrality (“samasyaaon ko tukdo mein nahin, samagrata mein dekhna chaahiye”). Underlying this belief was his understanding that life is an intricately interconnected web of facts and phenomena. The needs, interests and aspirations of diverse sections of people are inter-related, even inter-dependent. Sometimes they are mutually conflicting and balancing them is never easy. But the effort was always worth it. A responsible political party and government should never espouse some interests and neglect others. No section of society should feel alienated and deprived of justice. This, to him, was “raj dharma”, the irreducible duty of a ruler.
I have often wondered what made Vajpayee such a tall leader. The reason lies in his deeply sensitive personality. Being a poet at heart, “samvedana” (sensitivity) had become his second nature at a very young age. But his real greatness lies in the fact that he never allowed popularity or power to touch the core of his being.
As we bid adieu to Statesman Vajpayee, may we strive to inculcate his “insaaniyat” and “samvedana” in our lives and also in India’s political life. They are badly needed in both spheres.The writer was an aide to Prime Minister Atal Bihari Vajpayee in the PMO between 19