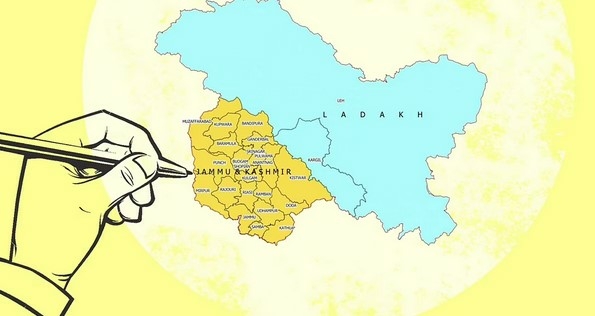 “The Government has constituted a Delimitation Commission headed by Justice (Retd.) Ranjana Prakash Desai for the purpose of delimitation of Assembly and Parliamentary constituencies in the Union Territory of Jammu and Kashmir,” Rai said in a written reply to question by Pachauri, former Minister from Uttar Pradesh who wanted to know whether any steps have been taken for completion of the work of delimitation at the earliest in Jammu Kashmir by the centre as a result of the meeting held with the “representatives of various political parties of Kashmir recently,” he said

The Delimitation Commission visited various places in Jammu & Kashmir from 6th to 9th July this year to “receive inputs from the stakeholders”.

“The endeavor of the Commission is to complete the said exercise as early as possible,” Rai said responding to a specific query by the parliamentarian about the time by which the work delimitation was likely to be completed.

Recently Home Minister Amit Shah said that the first delimitation will take place, then elections will be held, and then the process to restore statehood will begin.

“I have said this many times. Now they know that this will be the chronology so they want to create political dispute by demanding the opposite,” Shah had said

Under the constitutional scheme prior to 5 August 2019, the delimitation of assembly constituencies fell within powers of the erstwhile state of J&K and under the second proviso to Section 47 of the Constitution of J&K, the redrawing boundaries of the assembly was to be undertaken once the figures of the first census after the year 2026 are published, meaning thereby census of 2031.

However, as the things stand, the freeze on delimitation exercise brought in by the erstwhile government headed by then Chief Minister Farooq Abdullah and upheld by the Supreme Court has been lifted under the Jammu and Kashmir Reorganisation Act, 2019, the wires of which are under challenge before the top court of the country.

Under Part-V of the ‘Reorganisation Act, redrawing of the assembly constituencies has to be carried through a process defined in Delimitation Act, 2002.

Jammu and Kashmir saw the last delimitation exercise in 1994-95, after 22 years, which resulted in an increase in the number of Assembly constituencies from 76 to 87. The Jammu region saw an increase of five seats (from 32 to 37 seats), the Kashmir Valley an increase of four seats (from 42 to 46), and Ladakh two seats (from two to four).

The erstwhile State as a whole had a total of 111 seats—24 reserved and vacant for Pakistan administered Kashmir.

Post 5 August 2019 and the split of the State into two Union Territories—J&K and Ladakh—, the complexion of the legislative Assembly changed. Four Ladakh seats were declared void, reducing the strength of the J&K assembly to 83 from 87. At the same time, the new Act provided for increasing the number of seats to 90.

Section 60 of the Reorganisation Act deals with exercise and provides among others reservation of the seats for Scheduled Castes and Scheduled Tribes in the Legislative Assembly having regard to the “relevant provisions of the Constitution”. Also, the constituencies in which seats are reserved for the SC and the ST shall, as far as practicable, are to be located in areas where the proportion of their population to the total population is the largest, according to the Act.

This exercise has been started and is being carried out by a Delimitation Commission, whose orders have the force of law and cannot be questioned before any court. The objective is to redraw boundaries (based on the data of the 2011 Census) in a way so that the population of all seats, as far as practicable, be the same throughout the J&K.

On March 6, 2020, the government of India set up the Delimitation Commission whose five associate members include National Conference MPs— Farooq Abdullah, Mohammad Akbar Lone, and Hasnain Masoodi—besides Union Minister of State in the Prime Minister’s Office Dr. Jitendra Singh, and Jugal Kishore Sharma of the BJP.

Although the Commission was tasked to finish delimitation in a year, on March 4 this year, it was granted a year’s extension. This was done on the request of the commission members since it couldn’t make much progress due to the “Covid-19-induced shutdown across the country.”

Moreover, J&K State Election Commissioner KK Sharma was appointed only on October 30 last year, following which he was busy with the District Development Council (DDC) polls in J&K that concluded last December and saw the People’s Alliance For Gupkar Declaration, an alliance of various mainstream parties for restoration of Article 370 and 35A, win big.