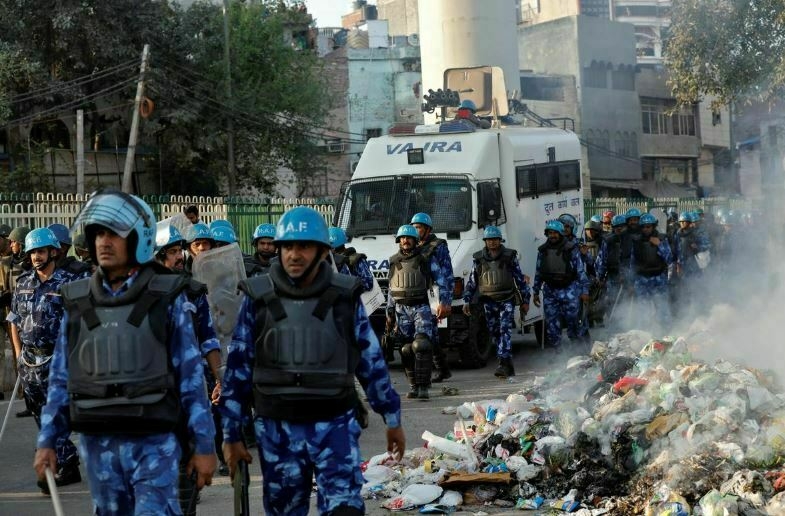 New Delhi, Feb 26: In his first reaction to incidents of violence in Delhi, Prime Minister Narendra Modi on Wednesday appealed for peace and brotherhood, and said he has held an extensive review of the prevailing situation in various parts of the national capital. He also said it was important that calm and normalcy was restored at the earliest.

“Had an extensive review on the situation prevailing in various parts of Delhi. Police and other agencies are working on the ground to ensure peace and normalcy,” Modi tweeted.

“Peace and harmony are central to our ethos. I appeal to my sisters and brothers of Delhi to maintain peace and brotherhood at all times,” he added.

At least 27 people have been killed in communal violence in north east Delhi for the last few days.

The situation in riot-hit northeast Delhi “is under control”, National Security Advisor Ajit Doval said after he held a meeting with senior officials of the Delhi Police and visited some of the affected areas on Wednesday afternoon.

At least 27 people have been killed and over 200 injured in communal violence that broke out in northeast Delhi three days ago. Jaffrabad, Maujpur, Babarpur, Yamuna Vihar, Bhajanpura, Chand Bagh, Shiv Vihar are among the areas mainly affected by the riots.

Doval, who has been tasked with checking the violence, held a meeting with the top brass of the Delhi Police at the office of the Deputy Commissioner of Police (northeast) in Seelampur.

This was Doval’s second visit to the office. He had visited the office and met senior officers on late night on Tuesday.

After the meeting, Doval went to Jaffrabad and Maujpur to take stock of the situation. He interacted with locals and assured them about ensuring peace in the area.

“The situation is under control and people are satisfied. We have confidence in law enforcement agencies. Police is doing their job and is alert,” he told reporters.

Time for all to lower temperatures: SC

New Delhi, Feb 26: The Supreme Court has deferred the hearing on petitions to remove the anti-citizenship law protesters from Delhi’s Shaheen Bagh to March 23, saying it’s “time for all parties to lower temperatures”. The top court made the remarks as parts of northeast Delhi witnessed unprecedented violence, with 27 killed and at least 200 injured in clashes.

“We have seen the report of the interlocutors. We don’t want to discuss it here. We want to defer it. The environment is not conducive…let the police and the system work,” Justice Sanjay Kaul said.

The two-judge bench of the top court also disposed a petition by a Shaheen Bagh resident, Bahadur Abbas Naqvi, seeking court-monitored probe into the violence sweeping parts of northeast Delhi, saying that the Delhi High Court is already hearing the matter.

Senior advocates Sanjay Hegde and Sadhana Ramachandran, who were named as mediators by the Supreme Court earlier this month, were tasked with persuading the Shaheen Bagh protesters to continue their agitation in another location, so the road can reopen and commuters do not face problems. The interlocutors had submitted their report to the court in a sealed cover on Monday.

During Wednesday’s hearing on the Shaheen Bagh matter, the Supreme Court made some strong observations on Delhi Police over the clashes in northeast Delhi. “There was lack of professionalism on part of police,” Justice KM Joseph said. “If the law was strictly implemented, these things would not have happened,” he said.

“Police doesn’t have to wait for orders if someone makes inflammatory statements but act in accordance with law,” the Supreme Court said.

Justice Joseph also gave the example of police in the US and the UK, and said the force has to act professionally as per law if something goes wrong. He added that the remarks are made not in adversarial context but to ensure that law and order is maintained.

The Shaheen Bagh protests have made headlines worldwide and inspired protests across the country. Hundreds of men, women and children have been protesting on the road for over a month against the CAA, which makes religion a test of citizenship and which critics say discriminates against Muslim.

One of the petitions in the Supreme Court stated that demonstrators are illegally protesting against the citizenship law by blocking the common and public road connecting Delhi to Noida. (Agencies)

New Delhi, Feb 26: The Delhi High Court on Wednesday expressed concern over the delay in action by the law enforcement agencies in containing violence in north-east Delhi, which claimed at least 27 lives and left hundreds injured.

“How many more lives have to be lost? How many properties have to be destroyed,” asked the High Court, while questioning the delay in action by the law enforcement agencies.

A division bench of Justice Muralidhar and Justice Talwant Singh, while hearing the plea seeking a judicial enquiry into the violence and registration of FIR against BJP leaders Kapil Mishra, Anurag Thakur and Pravesh Verma for allegedly making hate speeches, adjourned the matter till tomorrow.

The HC also said that it will take up each and every clip where anyone has incited violence in Delhi and will not let a repeat of 1984 happen. “This city has seen more than enough violence. No more!,” added the Court.

The HC directed the Delhi Police to examine the videos related to hate speeches by political leaders, which allegedly led to violence in northeast Delhi, and take a decision in the matter.

The High Court directed the Special Commissioner of Police to sit with the Commissioner in view of all these clips and make a conscious decision and convey it to the court by 2:15 pm tomorrow.

The court also enquired about the name of the officer, who is seen in the video of Kapil Mishra.

Advocate Colin Gonsalves, appearing for the petitioner Harsh Mander, argued that these people are the senior leaders of their political parties and said this is not just an opinion but the government policy.

On the prayer of Army’s deployment in the violence-affected area, the court said that it doesn’t want to enter into the question of Army deployment and shifted the focus on the issue of registration of FIR.

“How did they select just three clips out of thousands of clips being circulated on the line? What is this selective outrage?… Please do not allow demoralisation of the forces. What do they think the police is doing? Are they at the protest site for a picnic?” said Solicitor General Tushar Mehta.

Mehta said that the petitioner is unable to define why this petition is focusing on particular these three video clips.

The Delhi Police informed the court that 11 FIRs have been registered in connection with the violence and they will examine all aspects of the violence. (Agencies)

Tensions continued to simmer in and around North East Delhi for the fourth consecutive day as the toll from the violence rose to 27, with over 200 people injured. In some cases, the police have been accused of either inaction or complicity in the violence against large-scale attacks mostly on Muslim neighbourhoods. The Supreme Court and Delhi High Court castigated the police for inaction during the clashes.

“I think it’s very important that demonstrators be allowed to demonstrate peacefully and that security forces show restraint,” Guterres’ spokesperson Stephane Dujarric said in a daily press briefing. “This is the secretary general’s constant position.”

When asked if the United Nations was monitoring the situation, Dujarric said: “Yes, we’re obviously following it closely.”

Prime Minister Narendra Modi, in his first reaction to the violence that began on Sunday, appealed for peace and calm in Delhi. He said he has reviewed the situation and that security forces have been working towards ensuring “normalcy”.

The violence began after huge groups of people supporting the Citizenship Amendment Act clashed with those opposing it. Bharatiya Janata Party leader Kapil Mishra is accused of instigating people after he gave a three-day ultimatum to the Delhi Police to ensure that the streets of Jaffrabad and Chand Bagh were cleared of those protesting against the Citizenship Amendment Act. The protestors had been sitting outside the Jaffrabad metro station in North East Delhi since Saturday night as they emulated the two-month-old Shaheen Bagh demonstration in South Delhi, where women have also blocked a road to protest against the Citizenship Amendment Act, the National Population Register and the National Register of Citizens. (Agencies)