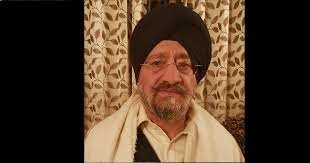 The decomposed body of former member of Jammu & Kashmir Legislative Council and National Conference (NC) leader Trilochan Singh Wazir was found in a flat in West Delhi on Thursday.

Family members of the 67-year-old veteran politician have left from Jammu. Wazir’s body has been sent for post-mortem. Delhi Police has registered a case of murder under Section 302 of the Indian Penal Code.

According to local media reports, Wazir had recently taken part in a meeting of the NC that was held in Jammu. Wazir was president of Jammu & Kashmir Transporters Welfare Forum (TWF) and a popular leader.

Expressing his shock at the sudden death of his party colleague, former chief minister and NC leader Omar Abdullah said it was only a few days ago that they met in Jammu.

“Shocked by the terrible news of the sudden death of my colleague Sardar T. S. Wazir, ex member of the Legislative Council. It was only a few days ago that we sat together in Jammu not realising it was the last time I would be meeting him. May his soul rest in peace,” he wrote on Twitter.