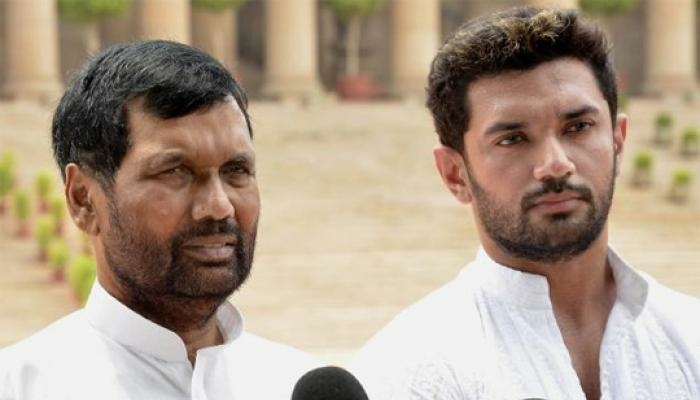 New Delhi: After the exit of Upendra Kushwaha’s Rashtriya Lok Samta Party (RLSP) from the National Democratic Alliance (NDA), another Bharatiya Janata Party (BJP) from Bihar, the Lok Janshakti Party (LJP), has raised an alarm for the ruling alliance. Taking to microblogging site Twitter LJP MP Chirag Paswan suggested that a solution needs to be reached before it’s too late.

Chirag Paswan said that the NDA is going through a sensitive phase after the exit of the Telugu Desam Party (TDP) and the RLSP, adding that the BJP should act in time to resolve issues with other allies.

Tweeting in Hindi, the LJP leader said, “After the exit of TDP and RLSP, the NDA is going through a sensitive phase. The BJP should act on the issues of other allies and resolve them in a respectful manner before it’s too late.”

Referring to the seat sharing deal between the BJP and its allies, Chirag, who is the son of LJP supremo and Union minister Ram Vilas Paswan, said that no concrete solution has been reached despite several meetings with BJP leaders.

“There have been meetings with BJP leaders over seat sharing within the alliance but no concrete solution could be reached till now. If no consensus is built on the issue at the earliest, it might result in loss,” said the LJP leader.

This comes months after Chirag Paswan had said that he was confident of the LJP getting “respectable number” of seats, asserting that the NDA would remain intact in Bihar. However, after an announcement by BJP chief Amit Shah and Janata Dal United (JDU) supremo Nitish Kumar that they would contest on 16 seats each in Bihar, the LJP had dismissed reports of the party making any “sacrifice” on number of seats.

Talking about the issue, Ram Vilas Paswan’s younger brother Paras has said that no seat-sharing talks would be complete until there’s consensus among national presidents of all NDA constituents. “We would like to contest from at least seven seats. We had won six of the seven seats from which we had contested last time and lost one by a slender margin of 7,000 votes. Our graph has not gone down since the last Lok Sabha poll and there is no reason why we should not get our due share,” he had said.