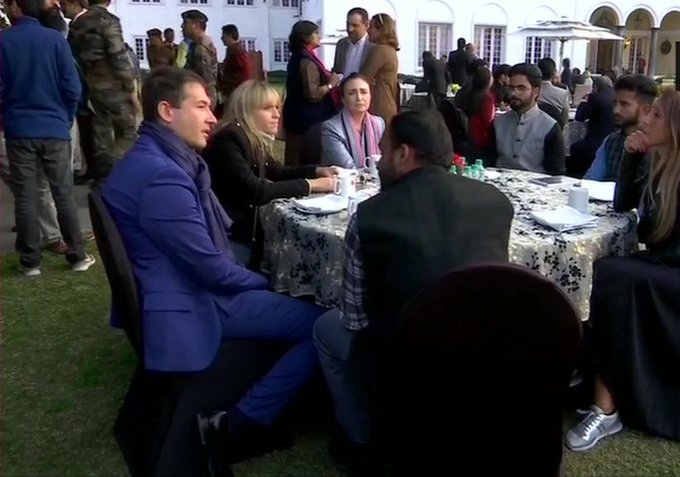 Srinagar, Oct 29: On the first day of their unofficial visit, European Union (EU) parliamentarians held wide ranging discussions with at least 15 delegations from the cross section of society.

Majority of the participants represented either unfamiliar organization of little known groups operating in different parts of Kashmir. However, there were certain known faces including Tauseef Raina, who unsuccessfully contested Municipal polls in Baramulla last year, Hilal Ahmad Lone, a religious cleric from remote Lolab, and student activist Sajid Yusuf from Kupwara.

Sources privy to the meeting said delegations discussed multiple issues including measures for restoration of peace, business losses due to the prevailing situation and the corruption in the echelons of government.

“Participants from business community sought EU’s intervention for restarting dialogue process between India and Pakistan to ensure long lasting peace in the valley. They also informed the EU delegates about the situation and losses to the business sector,” they said.

A delegation of youth activists talked about abrogation of article 370 in the state and “unending loss of lives.” Sources said women activists highlighted the growing unemployment and prevailing corruption in the valley.

Youth activist Tauseef Raina later told The Kashmir Monitor that during the interaction he sought “an end to the bloodshed in Kashmir.”

“I told them that violence is not going to solve any issue. A meaningful dialogue should be initiated between India and Pakistan. I told EU parliamentarians that there should be governance on the pattern of EU,” he said.

Raina said he did not discuss abrogation of article 370 with EU lawmakers. “I apprised them about the current situation in Kashmir. I also asked them that everyone should be allowed to put forth his views in a democratic manner,” he said.

One of the EU delegates said that they were very conscious of not meeting local people during their visit. “I do not have enough facts to come to conclusion. It is a good occasion to get views about what is happening here. Some people met and some are kept away. We are very conscious about it,” said Hermann Tertsch an EU parliamentarian from Spain.