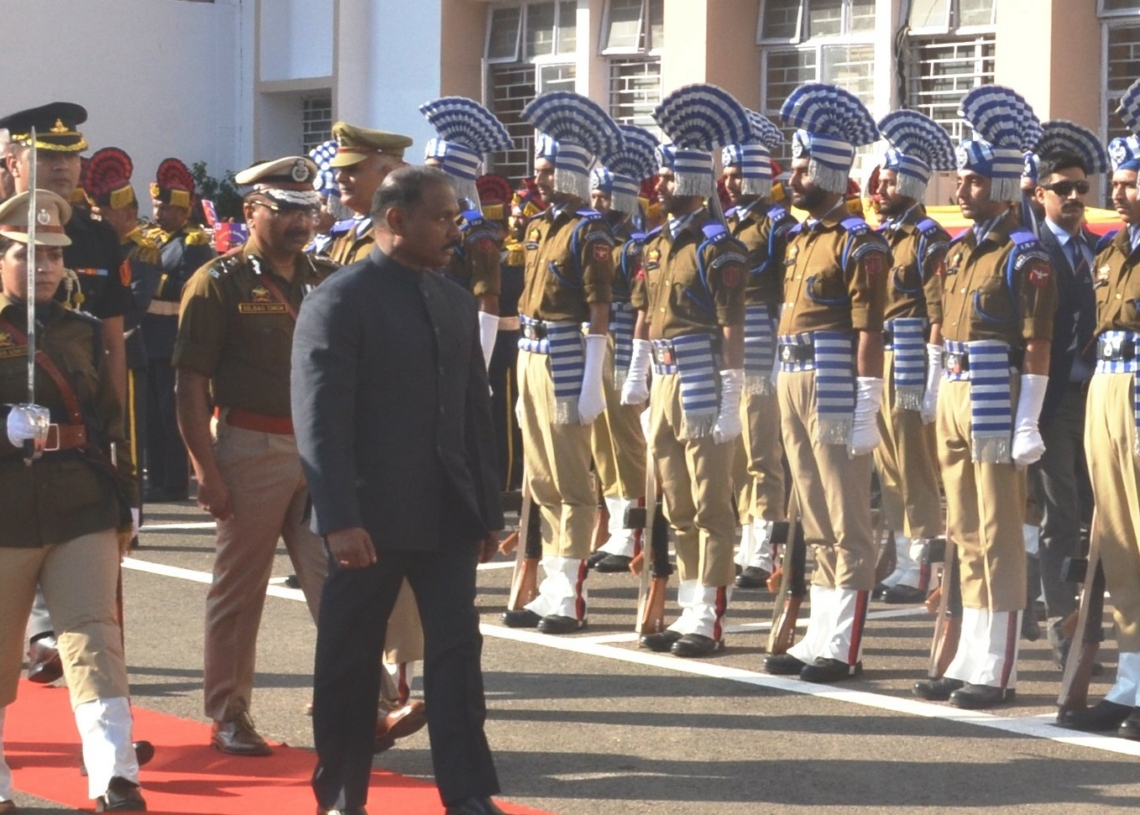 Jammu, Nov 4: Amid tight security arrangements, Civil Secretariat — the seat of Jammu & Kashmir government — and other offices reopened in Jammu on November 4 after functioning for six months in Srinagar as part of the nearly 150-year-old practice locally known as ‘Darbar Move’.

The bi-annual shift is the first after the State’s bifurcation into two Union Territories of Jammu & Kashmir and Ladakh which came into existence on October 31.

G.C. Murmu, who assumed office as the first Lieutenant Governor of the Union Territory of Jammu & Kashmir on October 31 at Raj Bhavan in Srinagar, inspected the traditional guard of honour given to him by a police contingent at the Civil Secretariat lawns at 9.30 a.m., marking the opening of move offices here.

He was received by the Chief Secretary, B V R Subrahmanyam, Director General of Police, Dilbag Singh, Administrative Secretaries and a large number of officers and employees of the Civil Secretariat.

However, Murmu skipped the customary press conference which was a usual practice by the head of the administration in the erstwhile State and instead straightway went inside the secretariat to embark on his official work.

The Secretariat and other government offices closed in Srinagar on October 25-26 after functioning there for six months. The other offices which resumed functioning here include Raj Bhavan and the Police headquarters.

Police and paramilitary forces have been deployed in strength in the city, especially on the roads leading to the Civil Secretariat as part of security measures to ensure the smooth functioning of the administration from Jammu.

The main road outside the secretariat was closed for civilian movement with barricades and heavy deployment of policemen. Only the civil secretariat employees are being allowed on the road after thorough checking.

In another meeting, Lt. Governor interacted with all the officers of the Civil Secretariat and sought their suggestions for further improving the quality and pace of work, in an open house.

Lieutenant Governor reiterated the resolve of the government for tirelessly working towards ensuring responsive and good governance at all levels. He advised the officers to keep public welfare as a central motto while discharging their duties.

Lt. Governor also visited the Police Headquarters where he received a Guard of Honour. Dilbag Singh, DGP, and other senior Police officers interacted with the Lt. Governor and briefed him about the law and order scenario and multiple challenges before the J&K Police.

Lt. Governor praised the role of the J&K Police for maintenance of law and order and complimented the Force for peaceful conduct of elections to the Panchayat and Urban Local Bodies.

He advised the Police Officers to stay alert and deal firmly with the elements inimical to the safety and security of state and stressed stern action against people involved in economic offences. He appreciated the synergy existing between the Police, Army, Central Armed Police Forces and Civil Administration and urged working with same zeal for maintenance of peace and security in J&K.

The practice of ‘Darbar Move’— under which the government functions in Jammu during six months of winter and in Srinagar during summer — was started by Maharaja Gulab Singh in 1872 to escape extreme weather conditions in the two regions.

However, the practice was continued even after Independence with the aim of providing governance benefits to both Kashmir and Jammu regions for six months by turns.

While Jammu and Srinagar cities benefit from this practice as the roads and other infrastructure gets the basic minimum repairs done on an annual basis, the Darbar Move incurs expenditure of crores of rupees.

The practice involves moving voluminous files between Jammu and Srinagar and thousands of employees between the two cities in hundreds of buses and trucks.

The employees who work in the move offices get almost two weeks of free holidays and compensatory allowances twice every year.

Several political parties have in the past demanded scrapping the practice and instead establishing permanent offices both at Jammu and Srinagar.