‘Ready to donate my blood for plasma therapy’: Cured of Corona, teacher shares story of loss and recovery 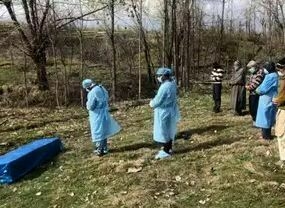 Srinagar: A family in Baramulla has weathered the storm. Fasting as its members lay on the prayer mats in their home in an idyllic village in Tangmarg, they thank Allah for giving them the strength to make it through.

A high school teacher by profession, thirty-six-year old Riyaz Ahmad and 12 other members of his immediate and extended family tested positive for COVID-19. They included his wife and eight-year-old daughter as well.

It was a harrowing turn of events that began in late March with the demise of his father, the 29th COVID-19 case in J&K then and the second person to die of it in Kashmir.

On March 28, the 62-year-old shopkeeper gasped for life as his sons moved him from one Srinagar hospital to another. The elderly lost the battle at around 4 am next morning at Chest Diseases hospital and by afternoon, his three sons including Riyaz the eldest one lowered him in the grave, wearing hospital gowns and masks.

The nightmare for this family had just started.

On the same day, Riyaz and his family were put into quarantine. In a few days, 13 of them tested positive for COVID-19.

For the next one month, their homes (Riyaz’s, his brother’s, and inlaws’) remained locked as the family was away, struggling with a virus that has brought the world to its knees.

They were treated first at GMC Baramulla, then at SKIMS Bemina, and finally kept in administrative quarantine at a facility in Dobiwan, Tangmarg.

Last Wednesday (April 29), as they all came back home cured after spending exactly one month away, there was a mix of joy and sorrow.

Speaking to The Kashmir Monitor, Riyaz shares his story of pain, hope, and respite that he says has elucidated to him the real meaning of the Quranic verse: ‘Verily, with every difficulty, there is relief. (94:05)’.

“It was a huge test from Allah and Al-hamdulillah we have passed it. Though our heart mourns for our father, we still thank God for helping us out in this torrid time,” he says.

For Riyaz, it is just sheer courage and accepting the will of Allah that can help a person pass such a test.

“Allah helped us see this through. As for my father, a hadeeth by Prophet (PBUH) affirms that he is a martyr. What else can I ask for,” he says.

To all those who have contracted Coronavirus or have been put in quarantine, his advice is not to panic.

“Emotionally it was draining but if you ask me, physically none of us had any symptoms. We didn’t even know when we contracted the virus and when we got rid of it,” he says.

“Take all the precautions and treatment advised by the doctors, and have faith in God,” Riyaz tells those who have tested positive for the virus.

He also suggests having a balanced diet.

The family was treated with Hydroxychloroquine and Azithromycin.

Besides for boosting immunity, they were asked to have Vitamin C supplements.

The family underwent multiple tests in the first few weeks of April which all came out negative. Then they were sent to administrative quarantine on April 20 from where they were allowed to go home on April 29.

STUDENTS FASTED, PRAYED FOR HIM

Riyaz realised the importance of teaching as a profession when his students, whom he teaches at home and at his school, prayed and fasted for his health.

“They fasted and prayed for me and my family’s health. Young boys and girls. I felt moved when I heard about it,” he says.

His colleagues at the High School Katipora in Tangmarg too remained in touch with him over the phone.

“Even they had to be in 14-day quarantine. Thankfully they all tested negative.”

HOW IS LIFE NOW?

Even though they are cured of the virus, Riyaz’s family still follows social distancing and precautions.

“We do work in our vegetable farm but maintain at least 10 feet distance from everyone including our next door neighbours and other people of the village,” he says.

The neighbourhood has offered all the help it could in these extraordinary times.

“They check on us if we need anything from a distance. Our relatives call and offer condolences. We tell them to stay in their homes for now since we are concerned for their health,” he says.

Riyaz hopes the good old times of communion and happy gatherings will soon be back.

Riyaz is ready to give his blood if it is needed to perform plasma therapy on COVID-19 patients.

The therapy, that several countries including India are seriously looking at, uses blood donated by recovered patients to introduce antibodies in those under treatment.

“All of us 13 including my 8-year-old daughter is ready to donate our blood. The administration should just let us know when and where we have to come and we will be there,” he says.