Curbs on Eid-e-Milad: Unprecedented: Dargah out of bounds 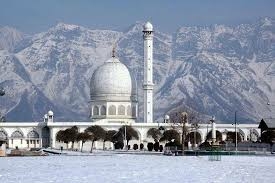 Srinagar, Nov 9: Ahead of Eid-Milad-un-Nabi (peace be upon him) to be observed on Sunday, authorities Saturday barred the congregation of people at the revered Dargah Hazratbal shrine here.

The unprecedented development took place even as valley is facing a dual crisis – one triggered by Thursday’s unseasonal snowfall that caused widespread damage across Kashmir and two: by the situation triggered after the abrogation of Article 370 in August this year.

On Saturday morning, all roads leading to Hazratbal were barricaded with concertina wires as police and paramilitary forces manned the entry and exit points near the historic shrine.

To mention, each year over 50,000 people assemble at Dargah on Eid-e-Milad, the birth date of Prophet Muhammad (peace be upon him). Most stay overnight to offer prayers and supplications to Allah, in what is considered as one of the largest religious gatherings in the valley.

Apart from offering prayers, the devotees stay put to have a glimpse of the holy relic of the beloved Prophet (peace be upon him) that is displayed after each prayers at the shrine on the occasion.

Authorities had already announced imposition of section 144 on Saturday across the valley, seemingly to maintain ‘law and order’ in view of the verdict in high-profile Babri Masjid-Ayodhya case, which eventually went in favour of the construction of Ram temple.

A police official said that there was no curfew in any part of the city though restrictions under section 144 CrPc were imposed in Srinagar as a precautionary measure.

“Security forces have been deployed in strength to maintain law and order in the city,” he said.

However, the situation on the ground was entirely different as all roads leading to the shrine were closed with barbed wires.

Since morning, forces personnel were directing people to take alternative routes to their respective destinations.

Only the people living around the shrine were allowed to enter it.

They alleged that no arrangements had been made for holding prayers in the shrine.

“Snow has not been cleared from the field and the surrounding areas of the shrine, where people used to gather for special night-long players. No arrangements, including heating system, have been put in place for the occasion,” Nadim Ahmad, a resident of Hazratbal, said over the phone.

Nawaz, another resident of Hazratbal, said that throughout the day police were manning the barricades and not allowing any outsiders towards the shrine.

“We used to have thousands of people assembling here every year but today there is hardly anyone. Just the locals,” he said.