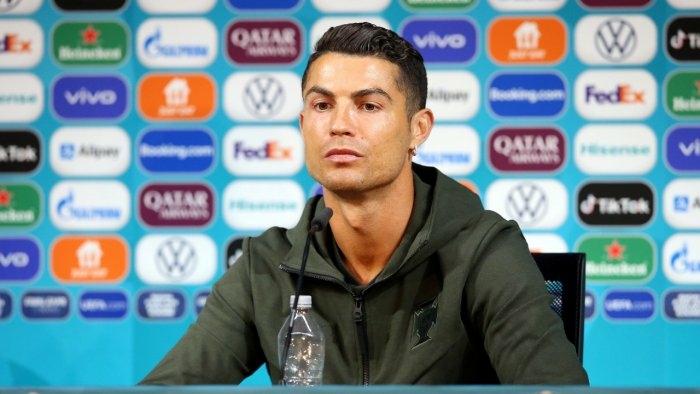 Cristiano Ronaldo‘s action of moving two Coca-Cola bottles had a negative impact on the brand.

The Portuguese star did not appear to be a fan of carbonated soft drinks after he removed two bottles of Coca-Cola kept in front of him at a Euro 2020 press conference, encouraging people to drink water instead.

The 36-year-old moved the cola bottles aside as he sat down to speak to the media ahead of their Group F opener against Hungary.

He followed it by holding a bottle of water before shouting in Portuguese: ‘Agua!’

In fact, the CR7’saction had a real-world impact as Coca-Cola’s stock prices dropped 1.6% as they went from being worth USD 242 billion to USD 238 billion, which is a loss of USD 4 billion, according to a report in The Daily Star.

Ronaldo though netted twice against Hungary to move beyond France’s Michel Platini as the record goalscorer at EUROs, taking his tally to 11 at the Puskas Arena.

Ronaldo and Platini had been locked on nine goals apiece before the tournament, but the Portuguese winger’s double late on against the Hungarians added to his growing tally of records.

Ronaldo had missed a superb opportunity in the first half when he fired over from close range with the goal at his mercy.

Windows 11 leaked: All you need to know about Microsoft's new OS