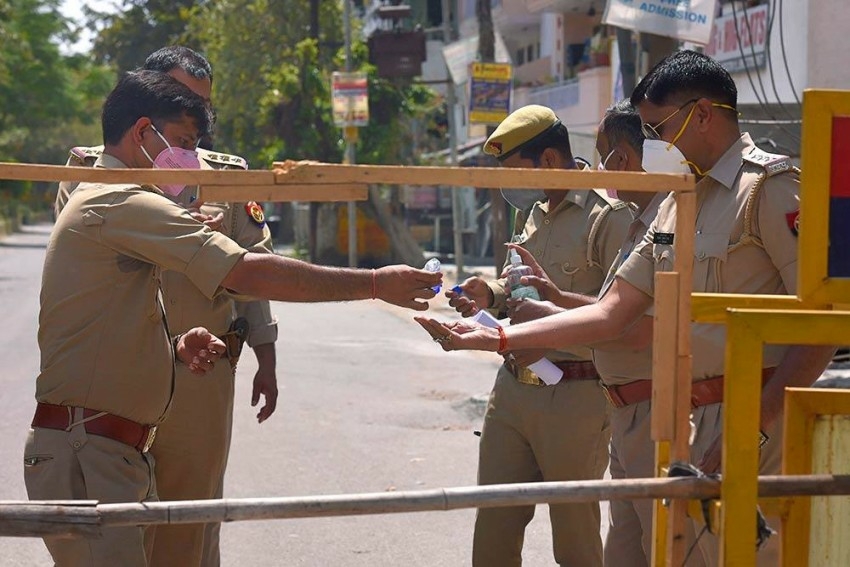 Policemen on duty in the wake of coronavirus pandemic in Ghaziabad, Uttar Pradesh. (Representational Image-PTI Photo)

New Delhi: The number of COVID-19 personnel in a Delhi-based battalion of the Central Reserve Police Force, the country’s largest paramilitary, has risen to 122, news agency PTI reported on Saturday.

The men belong to the 31st battalion of the paramilitary, based in Mayur Vihar Phase-III area of the national capital that has been entirely sealed after the huge numbers of the COVID-19 infection started building up over the last few days, the news agency reported.

“A total of 122 troopers of this battalion have tested positive for the virus. Results for over 100 more are awaited,” PTI quoted a senior official saying.

“The brighter side is that the maximum of these infected troopers are asymptomatic,” he said.

The personnel are admitted to an isolation facility of the Delhi government at Mandoli.

Twelve troopers had tested positive on Friday and a 55-year-old Sub-Inspector of this unit had succumbed to the disease early this week.

These huge numbers in a single battalion (of over 1,000 troopers) has rung alarm bells in the establishment after it was found that “dichotomous” orders were issued to check the spread of COVID-19.

While the general order in the force was a mandatory quarantine of 14 days for personnel joining back the unit from leave or having suspected exposure to a coronavirus-infected person, CRPF officers said it recently came to light that the medical wing of the paramilitary issued a separate order in April stating that doctors and paramedics can be taken off the quarantine if they do not show any symptom after five days.

Officials have indicated that the primary source of the COVID-19 infection in this unit could be a constable (nursing assistant) who joined this battalion after finishing his leave period at his home in the NCR.

The trooper is posted in another CRPF battalion deployed in Kupwara of Jammu-Kashmir and it is not clear as to how he contracted the infection. The family members of this trooper had also tested negative. It could be possible that some other asymptomatic personnel from the 31st battalion was the primary source of infection for the unit, they said.

The force is investigating all these angles apart from an instance where it was claimed that the nursing attendant was not kept under strict quarantine in the battalion camp leading to the spread of the infection.