Congress getting weak; Azad’s experience was not used: Kapil Sibal, other dissenters in J&K 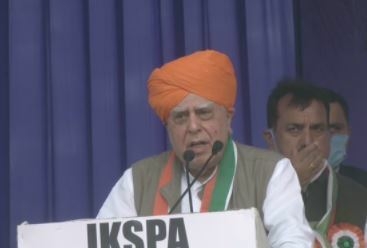 Senior Congress leader Kapil Sibal Saturday said that the party was “getting weak” even as he questioned the leadership of “not using” Ghulam Nabi Azad’s experience.

Sibal scathing remarks came during a ‘Shanti Sammelan’ event in Jammu on Saturday where the G-23 (the group of 23 dissenting Congress leaders) had met to “strengthen the party”.

“The truth is that we see the Congress party getting weak. That is why we have gathered here. We had gathered together earlier too and we have to strengthen the party together,” Sibal said, according to reports.

Sharma reiterated Sibal’s stance and said: “Congress has weakened in the last decade. Our voice is for the betterment of the party. It should be strengthened everywhere once again. The new generation should connect (to the party). We have seen good days of Congress. We do not want to see it weakening as we become older.”

Raj Babbar also seemed to be of the same opinion. “People say we are a part of G-23; for me, it’s Gandhi 23. With the belief, resolve and thinking of Mahatma Gandhi, this nation’s law and Constitution was formed. Congress is standing strongly to take these forward. ‘G-23’ want Congress to be strong,” he said.

He then went on to laud Azad’s work as a parliamentarian. “Azadji was recently given farewell from Parliament, even the prime minister wept. He also did not get angry by allegations made by (BJP leader) Rajmata Scindia and said ‘I take these allegations seriously and a panel be formed and headed by Vajpayee and will accept their decision’. This is Gandhian ideology,” said Babbar.

The opinions were mirrored by Sibal, who said that Azad knows the ground reality of Congress in every district.

Meanwhile, the Congress leadership tried to smoothen things out.

Senior spokesperson of the party Abhishek Manu Singhvi said at a press conference that the leaders are highly “respected” in the party but they should have done more to “strengthen” the party in the poll-bound states.

Singhvi played down the issue and said, “Each of the persons who are in Jammu are well regarded in the party. We are proud to have them in our party and I believe they are equally proud to be members of the Congress Party therefore they are part of this Congress family and therefore whatever I say is with the greatest respect to the leaders.”

“I respect the traditional legacy between Congress and them over these last three-four decades. The principal person in whose honour this (Jammu) rally was organised, nobody has used the word “istemal” (Use) in relation to Mr Azad, he has never complained. Those who use the word “istemal” betray certain things, lack of knowledge and ignorance about the contemporary history of the Congress and about the older history of the party. We are proud and he is proud that he has held the Congress flag for more than 7 terms in Parliament, 5 in Rajya Sabha and two in Lok Sabha, which is roughly 40 years. Congress President Sonia Gandhi nominated him as chief minister of Jammu and Kashmir.”

“I would therefore very, very gently and respectfully say that the best contribution to the Congress cause is to be active not among ourselves but to be active in various Abhiyans (campaigns) going on everyday in five states where the Congress is fighting elections. In light of what I have said I don’t intend to answer those questions which sensationalize the issue and digress from the core issue,” Singhvi added.

Congress supporter Tahseen Poonawala was more critical and said, “I ask questions of Anand Sharma ji and Ghulam Nabi Azad sahab. Can they continuously win Lok Sabha elections from their home states? What did they do to strengthen the party in states like UP & TN where they were in-charge? Why did they not demand elections when they were always enjoying the ‘fruits of power’?

Why are they not campaigning in the state elections that are due?”