Citizenship row: Why Assam is erupting 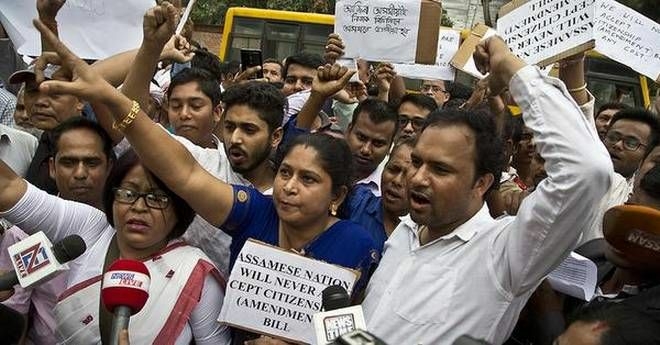 Assam is currently witnessing its biggest-ever uprising after the six-year-long agitation against illegal migrants from Bangladesh ended on August 15, 1985 with the signing of the Assam Accord between the agitationists and the government — both the Centre and the state. The Assam Accord stipulated March 25, 1971 (the day Bangladesh was born) as the cutoff date for detection and expulsion of the illegal migrants. This meant any migrant from Bangladesh who has been staying in this country having illegally entered India after this date must be detected and sent back to the country of origin.

For the past 33 years, the issue has been alive and has been a dominant theme of electoral politics simply because only a few thousand people have been actually sent back to Bangladesh with or without Dhaka’s consent. From 1985 till February 2018, a total of 29,738 foreigners (read Bangladeshis) have been “pushed back and deported”. Official figures show that only 75 people have been “deported” to Bangladesh from Assam after March 2013. Now, while those who have been “deported” must have been done with Dhaka’s consent, those “pushed back” must have been just asked to cross over the border. Obviously, this category is unlikely to have the consent of the Bangladesh government.

In this backdrop, all successive governments in Assam and the Centre have been facing the blame of having failed miserably to detect and expel illegal Bangladeshi migrants from Assam and the rest of the Northeast. All these years, the Congress had faced the charge of turning a blind eye to the presence of migrants in Assam who the party was accused of using as a bloc votebank. Perfume baron Maulana Badruddin Ajmal launched the All-India United Democratic Front (AIUDF) in 2005 and the party was immediately seen as one banking on this chunk of voters and supporters — Bengali-speaking Muslims of Bangladesh or East Bengal origin. So when the BJP came to power at the Centre in 2014, hopes soared that illegal migrants from Bangladesh would be finally detected and expelled.

Nothing of that sort has happened in the last four years of the Narendra Modi government at the Centre and the two years of the BJP-led government of Sarbananda Sonowal in Assam. The only thing that has happened and gained momentum is the process of preparing an updated National Register of Citizens (NRC), that is expected to weed out the illegal migrants and have only bonafide citizens in the list in view of the stringent checks and scrutiny mechanism put in place. If one thought the NRC exercise itself was mired in controversy because of instances coming to light of people using fake documents to get their names included in the list, more surprises were to follow.

Then came this controversial decision by the Centre that would further complicate Assam’s citizenship conundrum. In 2016, the Narendra Modi government mooted a proposal to facilitate granting of citizenship or stay rights to Hindus, Sikhs, Parsis, Buddhists, Jains and Christians from Bangladesh, Pakistan and Afghanistan. The NDA government’s argument was that these minorities, particularly Hindus from these countries, have only India to turn to in the event of persecution, and, therefore, must be helped. New Delhi took into account the fact that people from these communities who entered India either without valid travel documents or travel documents that have expired are considered illegal migrants, and hence not eligible to apply for Indian citizenship. The new idea was to allow such people to apply for Indian citizenship.

The proposal was immediately met with strong opposition in Assam. The amendment to the Citizenship Act 1955 to include this provision would mean Assam or the country was ready to allow Hindus from Bangladesh who had entered even after the 1971 cutoff date to be eligible for Indian citizenship. Groups like the All Assam Students Union (AASU), which was at the forefront of the Assam agitation, and parties like the Asom Gana Parishad (AGP), which incidentally is an ally of the BJP in Assam, opposed the move, saying that they were not prepared to let any illegal migrant stay in Assam, irrespective of whether they were Hindus or Muslims. They said citizenship cannot be conferred on the basis of religion. The movement against the Citizenship Amendment Bill had started full blast.

Soon it turned out that the opposition to the proposed Citizenship Amendment Bill has become the Sonowal government’s biggest political challenge so far. Its alliance partner, the AGP, that has three ministers in the Sonowal ministry, has threatened to quit the ministry if the government goes ahead in actually coming up with the bill.

Assam’s two broad geographical entities — Brahmaputra and Barak Valleys — have been sharply divided over this issue. The Assamese-dominated Brahmaputra Valley has risen in revolt against the proposed bill, whereas the Bengali-majority Barak Valley has generally welcomed the idea because the category of people who are sought to be granted citizenship are Bengalis. Politicians in the Barak Valley seem to be happy because this category of people would comprise a big chunk of the electorate. This divide has seen Congress leaders in the Barak Valley going against the official party line of opposing the proposed bill, and coming out openly in its support.

Student groups from the entire Northeast, under the banner of the influential North-East Students Organisation (NESO), have come together in opposing the bill. This has resulted in a joint demonstration by eight apex student groups from the region in Guwahati and protests in their respective states. The decision by the National People’s Party-led government in Mepghalaya led by Conrad Sangma, of which the BJP is a constituent unit, has added pressure on chief minister Sarbananda Sonowal. The question being asked by groups and individuals is simple — if the Meghalaya government can take a Cabinet decision opposing the proposed bill, why can’t the Sonowal government take a similar decision. The scale of the protests has compelled Mr Sonowal to say more than once in the past few days that he or his government would do everything possible to “safeguard” the interests of the people of Assam. But here the question arises whether he is talking about protecting the interests of people in the Brahmaputra Valley, who are largely opposing the amendment, or those of the Barak Valley, who are generally welcoming it. The debate is open.