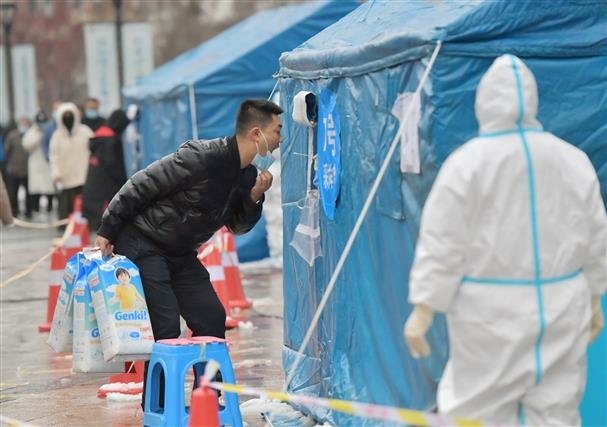 Beijing: China’s high-tech Shenzhen city, which has a population of over 17 million, was the latest to shut down to control the surge of Covid-19 cases, as the government scrambled to contain the worst outbreak of virus cases in the last two years.

Shenzhen will seal all communities, villages and suspend bus and metro services from Monday to Sunday due to the latest Covid-19 outbreak, state-run China Daily reported on Sunday.

Shenzhen which has been battling an Omicron surge since late February, will carry out three rounds of citywide Covid-19 tests next week.

In a statement, city authorities urged the residents to work from home and to step out only to buy daily necessities.

After topping 1,000 new cases for two days in a row, new locally transmitted cases in China surged to more than 3,100, the National Health Commission reported on Sunday. This is the highest in two years.

The situation is such that China is on the brink of its biggest Covid-19 crisis since Wuhan, the Post report said.

The coronavirus first broke out in Wuhan in December 2019 before it spread to almost all parts of the world, claiming over 6 million lives so far.

It is significant that cases in China are on the rise when most of the countries are opening up following decrease in cases.

China’s Zero COVID-19 case policy is coming increasingly under stress in the past few weeks as several cities including Shanghai and Beijing are witnessing fresh wave of cases.

It came as 16 provinces reported new coronavirus infections, as did the four mega cities — Beijing, Tianjin, Shanghai and Chongqing.

Some local health authorities have attributed the surge to the Omicron variant, which is more transmissible but causes less severe symptoms than the original COVID-19 virus, the Post report said.

As part of its Covid-19 responses, China has added antigen detection as an option for Covid-19 testing among the public, in efforts to boost the early discovery of Covid-19 cases.

Shanghai asked the people of the city not to leave and those who do must hold a certificate for a negative nucleic acid test results taken 48 hours before departure, state-run Xinhua news agency reported.

The big spikes in cases came after a top Chinese official claimed on March 4 that China is one of the best performers in curbing the Covid-19 pandemic and attributed the success to its stringent zero-case policy of restricting national and international travel with proactive local lockdowns wherever the virus surfaced.