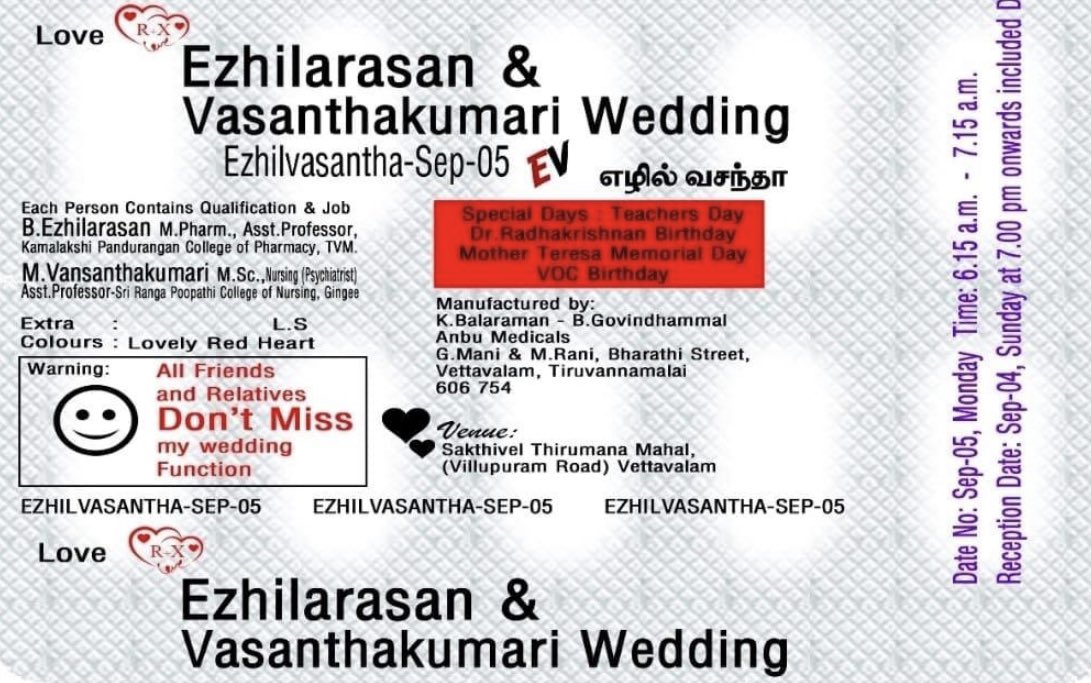 Some people are so creative that even the little things they do reflect that side in them. One pharmacist has left the internet utterly impressed with the way he designed his wedding invitations. He surely thought out of the box!

The pharmacist’s wedding invitation was posted online by Harsh Goenka. Staying true to his profession, his wedding invite looked like the back side of a pack of tablets.

However, contrary to the usual warning and ingredient list, it contained the details of the groom and bride, their qualifications and wedding information. The bride and groom identified as Ezhilarasan and Vasanthakumari respectively are set to tie the knot on September 5.

As a “kind” warning to friends and family under the usual warning section of the tablet cover, the couple stated, “All friends and relatives don’t miss my wedding function.”

Goenka posted the picture of the invitation on Twitter with the caption, “A pharmacist’s wedding invitation! People have become so innovative these days.”

The internet was quick to comment on the photo. Many praised the man for his innovation and creativity. “The Tamizh intellect and their creativity at its best,” wrote one. “Height of creativity,” wrote another. Others referred to it as “unique”. Meanwhile, some took the extra effort of imagining what the other details of the wedding would look like. One user posted a picture of a plate with meds and wrote, “The wedding feast be like.”

There were also users who pointed out some flaws. According to one, the expiry date was missing. LOL!