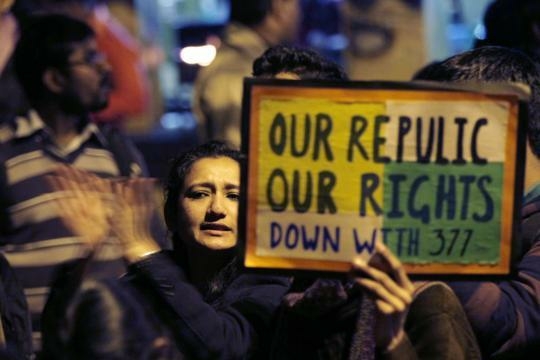 New Delhi:The Supreme Court can decide if a law that criminalises consensual gay sex is constitutionally valid, the government said on Wednesday.
“So far as the constitutional validity [of] Section 377 to the extent it applies to ‘consensual acts of adults in private’ is concerned, the Union of India would leave the said question to the wisdom of the Hon’ble Bench,” said a three-page affidavit filed by the Home Ministry.
The government said it will file a detailed affidavit if the court decides to examine any other question than the constitutional validity of Section 377, “or to construe any other right in favour of or in respect of LGBTQ”.
A five-judge Supreme Court bench led by Chief Justice of India Dipak Misra said on Tuesday it will not decide on questions such as inheritance and the civil rights of people in same-sex relationships when it began hearing a batch of petitions challenging Section 377.
“The question here is whether section 377 is ultra vires or not. Let us get out of this maze. We cannot now give an advance ruling on questions like inheritance to (same sex) live-in partners, whether they can marry, etc. Those are individual issues we cannot pre-judge now,” said CJI Misra.
In 2009 the Delhi High Court effectively decriminalised gay sex, saying a ban violated fundamental rights, but the Supreme Court reinstated it in 2013 after religious groups successfully appealed.