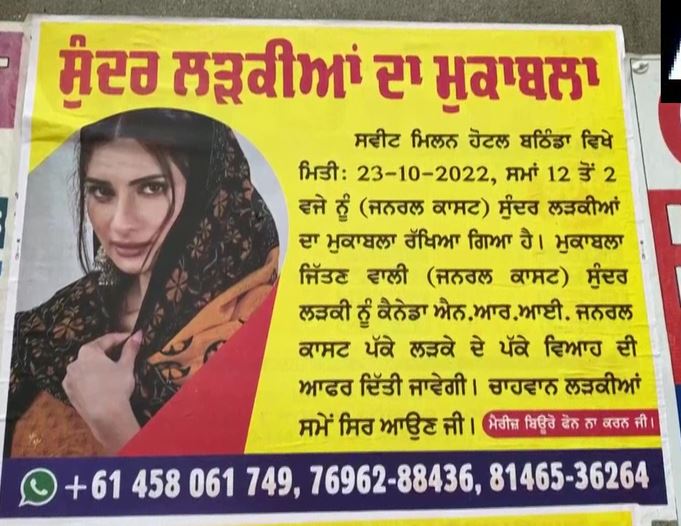 In a shocking incident, two men were arrested in Punjab for putting up posters of a beauty contest that promised the winner a chance to marry a Canadian NRI.

Posters of a beauty contest promising the winner a chance to marry a Canadian Non-Resident Indian or NRI groom in Punjab’s Bathinda led to the arrest of a man and his son, the police said on Friday.

The posters were found pasted on walls at several places in Bathinda on Thursday, quickly spreading online and triggering a backlash.

They advertised a competition of “beautiful women” to be held at a local hotel on October 23 with the winner being offered a chance to get married to an NRI who lives in Canada.

A police official said that a case was registered over the posters, including charges under the Indecent Representation of Women (Management) Act, 1986.

“Pasting posters to organise a beauty competition in Bathinda to choose a girl of a particular caste for marriage is highly condemnable,” she said in a statement.

The minister ordered the director of the social security, women and child development department to submit a report in this regard as soon as possible.

Kaur asked the deputy commissioner of Bathinda to take strict action against those responsible.