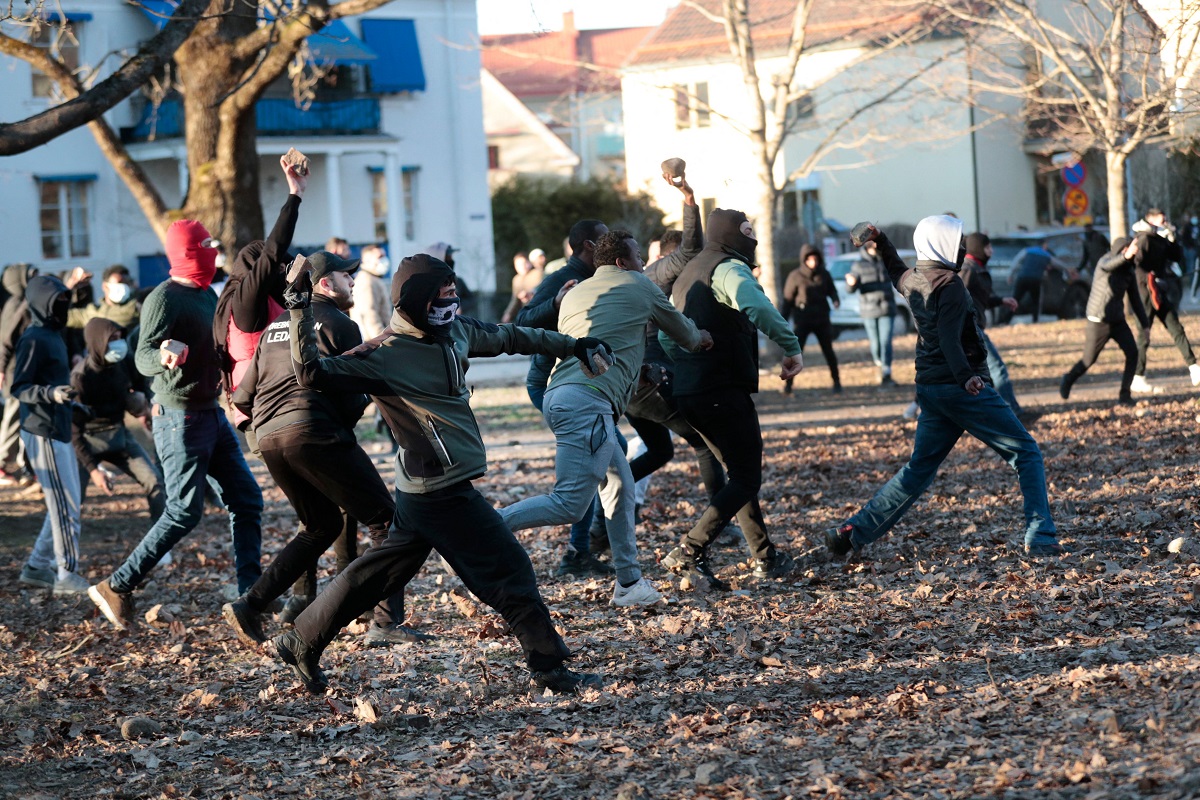 Counter-protesters throw stones in the park Sveaparken in Orebro, south-centre Sweden on April 15, 2022, where Danish far-right party Stram Kurs had permission for a square meeting on Good Friday. - Counter-protesters demonstrating against a rally by the anti-immigration and anti-Islamic Stram Kurs (Hard Line) movement led by Danish-Swedish Rasmus Paludan and their intention to burn a Koran, clashed with police on Friday, leaving four police officers injured, authorities said, the second day running that there had been clashes. - Sweden OUT (Photo by Kicki NILSSON / TT NEWS AGENCY / AFP) / Sweden OUT (Photo by KICKI NILSSON/TT NEWS AGENCY/AFP via Getty Images)

At least 40 people were injured in clashes that broke out over Easter weekend in southern Sweden following a far-right anti-Muslim rally. The clashes erupted in several of Sweden’s southern cities after burnings of the Quran by Rasmus Paludan, leader of the Danish far-right Stram Kurs (Hard Line) party.

Pakistan and other Muslim countries strongly condemned the abhorrent act of desecration of the Holy Quran during the rally in Sweden and the offensive remarks by the Dutch politician, attacking Islam and the Muslim holy month of Ramadan.

These mindless provocative Islamophobic incidents serve no purpose other than hurting the sensitivities of over 1.5 billion Muslims living all over the world, the Pakistan Foreign Office (FO) said in statement.

“Muslims, including in Pakistan, unequivocally condemn the practice of insulting Islam, Christianity and Judaism alike, and stand against all acts of violence on the basis of religion or belief,” said FO, adding that these principles must be equally respected and supported by all.

The FO said that the international community needs to show a common resolve against xenophobia, intolerance and incitement to violence on the basis of religion or belief, and work together for promoting inter-faith harmony and peaceful co-existence. The FO said Pakistan’s concerns have been conveyed to the authorities in Sweden and The Netherlands and they have been urged to take cognizance of the sentiments of the people of Pakistan and the Muslims worldwide.

Arab countries with Muslim majority populations have also condemned the burnings of the Quran, as Saudi Arabia called Paludan’s actions a “deliberate abuse of the Holy Qur’an.”

In a statement published on their state news agency SPA on Sunday, the kingdom called the burnings “provocations and incitement against Muslims by some extremists in Sweden” and stressed “the importance of concerted efforts to spread the values of dialogue, tolerance and coexistence, reject hatred, extremism and exclusion, and prevent abuse of all religions and sanctities.”

In Iraq, the government urged the Swedish government to stop “provocative” actions.

“[The act] was considered a provocation to the feelings of Muslims and extremely offensive to their sanctities…this matter has serious repercussions on the relations between Sweden and Muslims in general,” a statement by the Iraqi Ministry of Foreign Affairs said on Sunday.

In a tweet, the Emirati diplomatic adviser to the president, Anwar Gargash, rejected the “hatred” and “intolerance” against Islam.

The Egyptian Ministry of Foreign Affairs “condemned the intentional abuse of the Holy Qur’an” by the far-right, saying it is “among the extreme right-wing practices that incite against immigrants in general and Muslims in particular.”

Kuwait “expressed its utter condemnation and disgust towards the acts of desecration perpetrated by Swedish extremists against the Holy Quran,” the state news agency KUNA said.

And Jordan’s Ministry of Foreign Affairs said the action “contradicts all religious values and principles, human rights principles and basic freedoms, and fuels feelings of hatred and violence and threatens peaceful coexistence.”