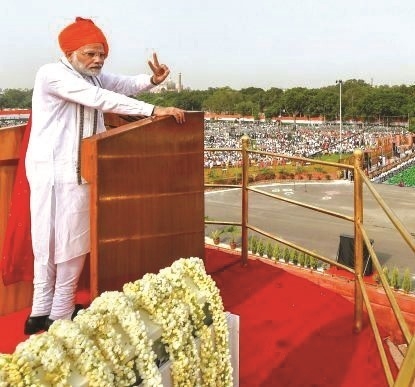 New Delhi, Aug 15: Repeating the words used last year on Jammu and Kashmir, Prime Minister Narendra Modi on Wednesday said Kashmir problem can be resolved only by embracing its people, not with bullets or abuses.

In his speech on the 72nd I-Day at the Red Fort here, he said his government was following the teachings of former Prime Minister Atal Bihari Vajpayee.

“Vajpayeeji called for ‘insaniyat’ (humanity), ‘Kashmiriyat’ (eclectic Kashmiri culture) and ‘jamhooriyat’ (democracy). That is the correct path. I also said that the issues in Kashmir can be resolved by embracing the people of Kashmir.”

Modi said his government was committed for the all-round development of all sections and regions in Jammu and Kashmir, the country’s only Muslim-majority state.

He said Jammu and Kashmir, now under Governor’s Rule, would hold the much-awaited Panchayat and local body elections. He did not say when.

Meanwhile, in his I-Day address here, he underlined his commitment to the passage of the instant triple talaq legislation in Parliament.

He blamed “some people”, an apparent reference to opposition parties like the Congress, for stalling its passage in the recent Monsoon session.

The bill criminalises the practice of instant triple talaq or talaq-e-biddat and seeks prison term of up to three year for the men.

He said the government had once again pushed for the passage of the bill in the Monsoon Session.

“The practice of triple talaq has created problems in life of Muslim women … we brought law in Parliament, but some people are not allowing to pass it. I assure you that you would not be let down. I will do all it needs (to bring the law),” he said.

While the bill has been passed by Lok Sabha, it is pending in Rajya Sabha where the government lacks numbers.

To make the proposed law palatable to the opposition, a provision of bail for the accused from a magistrate has been added. Also, the amendments to the bill cleared by the Union Cabinet last week, make provision for settlement between the husband and the wife.

In rest of speech, the Prime Minister talked of space research, health and India’s ‘achievements’ under him.

The PM announced the long-awaited manned space mission by India, for which space agency ISRO has been prepping. By 2022, “a son or daughter of India will go to space with a tricolor in hand,” PM Modi said.

The other big announcement was the rollout of the world’s largest government-funded healthcare programme — the Ayushman Bharat, which would benefit 50 crore people. Focussing on the achievements of his government in his fifth and final address from the ramparts of the Red Fort before next year’s elections, PM Modi said, “We can take tough decisions because nation’s interest is first for us, not the party’s”.

In a dig at the Congress, he said, “If we don’t look at where we started, we will not be able to how far we have come. If we take 2013 as the base year, you’ll be surprised to learn the pace of progress… The world used to talk about electricity blackouts, bottlenecks in India. Today it says the “sleeping elephant” has started walking”.

PM Modi also issued a warning on the spiraling atrocities on women — one of the subjects recommended by the people after he sought their advice on subjects to be covered in his Independence Day address.  “Rapes are being tackled sternly. It should be widely reported how rapists are being sent to the gallows for their crimes. Rule of law is supreme, no one can take law in their hands,” he said.

India, he said, has improved its standing in the world today. “Today when any Indian goes anywhere, all countries of the world welcome them… The power of the Indian passport has increased,” he said.