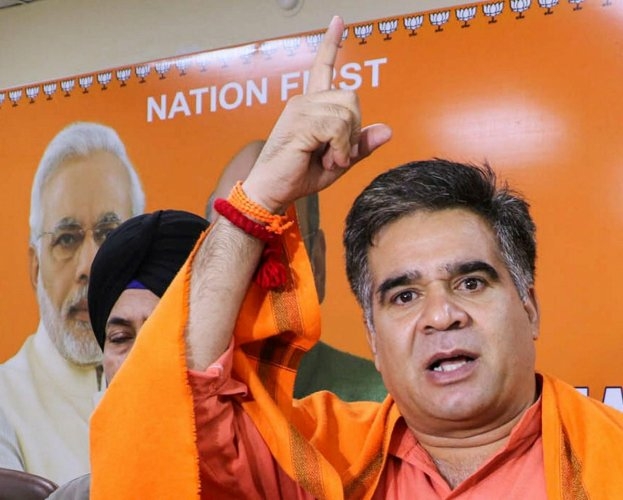 Jammu: The Jammu and Kashmir BJP on Friday demanded the arrest of PDP chief Mehbooba Mufti for her “seditious remarks” wherein she said she would only hold the national tricolour when the flag of the erstwhile state is restored.

The BJP said “no power on earth” can either hoist the state flag again or restore Article 370, which granted special status to the erstwhile state of Jammu and Kashmir.

Addressing reporters for the first time since her release from 14-month detention following the abrogation of Article 370 in August last year, Mehbooba said she will only hold the national tricolour after the flag of Jammu and Kashmir is restored. In an act seen as defiance, the flag of the erstwhile state was prominently placed on a table in front of the Peoples Democratic Party (PDP) president along with that of her party during the presser.

“I request Lieutenant Governor Manoj Sinha to take cognisance of seditious remarks of Mehbooba Mufti, book her for the seditious act and put her behind bars,” Jammu and Kashmir BJP president Ravinder Raina told reporters.

“We will sacrifice every drop of our blood for our flag, country and motherland. J&K is an integral part of our country, so only one flag can be hoisted in J&K and that is the national flag,” he said.

Mehbooba Mufti expressed her anger against the Centre saying the people of Kashmir were not comfortable with the current regime and set-up in the valley.

“Every one seems to be unhappy with the government. Not only the Kashmiris, the farmers and Dalits too are very agitated at present. Their rights have been snatched,” she said in her first press conference after her 14-month incarceration.

Mufti said the time has come for Kashmir’s leaders to make sacrifices and fight for the reinstatement of the special constitutional status, which was taken away from Jammu and Kashmir last August. “Kashmiris have seen enough bloodshed and now is the time for leaders to pitch in and sacrifice their lives to fight for their legitimate rights.”

Raina said the party will not tolerate such “nefarious designs” aimed at instigating the people of Kashmir.

“I warn leaders like Mehbooba Mufti not to instigate the people of Kashmir. We will not allow anyone to disturb peace, normalcy and brotherhood. In case anything wrong happens, she will have to face the consequences,” he said.

“If Kashmiri leaders are feeling insecure in India, they can go to Pakistan and China,” he added. During her presser, Mehbooba accused the BJP of “looting” the dignity of the people of Jammu and Kashmir.

“We had acceded to a liberal, democratic, secular India. Let me tell them we are not comfortable, we are incompatible with today’s India where minorities and Dalits are not safe and where they tried to disrespect us by looting our dignity,” she said. Referring to the Centre’s move to abrogate Article 370 on August 5 last year, Raina said no decision taken by the government can be reversed.

He said Article 370 “gave rise to separatism, militancy and was instrumental in killings of thousands of people”.

J&K Pradesh Congress Committee also condemned Mufti’s statement saying it is unacceptable and has hurt sentiments of people. “Such statements are intolerable and unacceptable in any society,” JKPCC chief spokesperson Ravinder Sharma said.

Sharma said the National flag is the symbol of honour for the country and reminds of the sacrifices of crores of Indians to achieve freedom and to protect the dignity, honour and the territorial integrity of the country. He said such statements will defeat the democratic and constitutional struggle for achieving any just right.

Some countries on 'dangerous track' in pandemic: WHO