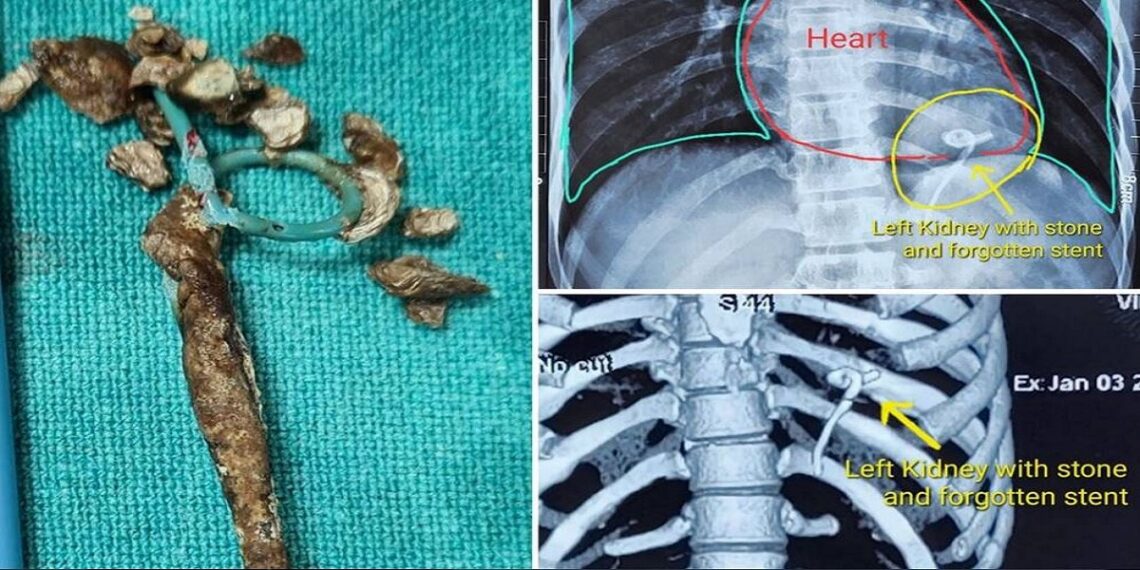 In a rare medical development, doctors at the Nizam’s Institute of Medical Sciences (NIMS) in Hyderabad successfully removed kidney stones and a discarded stent from a 22-year-old man’s kidney which was, to their shock, found to be located near his heart and left lung. According to a report by Indian Express, the doctors said it was a rare congenital condition. Interestingly, the patient was not aware of it.

Quoting Dr Rahul Devraj, professor at the department of urology and renal transplantation, the report said that the patient reached out to the hospital around two weeks ago with severe pain in the upper abdomen and lower chest, on and off fever and pain while passing urine. During the examination, he was found to have kidney stones around a stent that was temporarily placed in his left kidney following surgery for the removal of the lower ureteric stone three years ago.

“After removal of stone, they put a stent on for a good three weeks to bring down swelling etc. However, the stent was not removed. So, now, the stent is broken and we found the broken fragments and stones inside the left kidney. To our surprise, we found that the kidney was in the thorax (chest cavity) which was just by the side of the heart and the left lung, making it very complicated,” Dr Devraj was quoted saying in the report.

According to the doctor, even the patient was unaware of this congenital condition as in the previous case of ureteral surgery, the stone was in the lower ureter and it was removed through the abdomen itself.

The doctors were in a fix because according to them, there is no literature available on what to do in such scenarios. Dr Devraj said he had not seen a case of thoracic kidney in his 17 years at the NIMS. “So we passed the endoscope and collapsed his left lung to ensure the safety of the heart and the lung before puncturing the left kidney. The patient was placed on single-lung ventilation during the surgery and a keyhole endoscopic procedure was performed on his left kidney in the chest to remove the stone along with the retained stent under video thoracoscopic guidance,” said Dr Raj, adding that the patient has recovered well post-surgery.