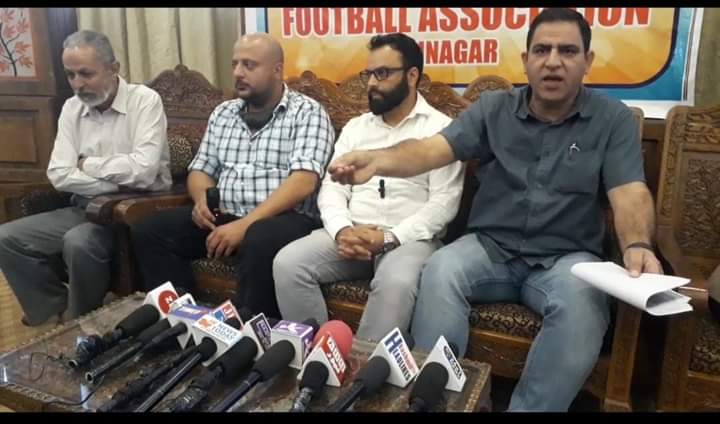 He said ACB lodged FIR on July 22 but no action has been taken against the accused. He said accused officials are organizing tournaments and trying to create an impression that everything has been sorted out.

Another office-bearer Waseem Aslam said there is documentary evidence against the accused. These include fake bills of biryani, referee bills, and several other documentary proofs  He said that the money was meant for promoting sports activities but a few corrupt officials acted as brokers.

“This is the reason why sports are not flourishing in this part of the world. We appeal to LG  Manoj Sinha Ji  to look into the matter and arrest the accused at the earliest,” he said

“A preliminary inquiry was conducted by Anti-Corruption Bureau upon a complaint lodged by well-wishers of Football Association through Mushtaq Ahmad Bhat, son of Abdul Khaliq Bhat of Sopore alleging that funds allotted by the J&K Sports Council and other government and semi-government agencies, for conducting football activities across J&K were misused and the funds sanctioned by the government through J&K Sports Council to organize tournaments like Khelo India and Mufti Memorial Gold Cup were not utilized properly,” the FIR said.

“During the investigation, it was found that members of J&K Football Association showed an amount of Rs 43,06,500 paid to Mughal Darbar, Polo View Srinagar for purchase of Biryani as refreshment for the teams. But no such refreshment has ever been given to any team in any district of Kashmir province. The bills raised and placed on record in this regard have been found fake,” the FIR added.