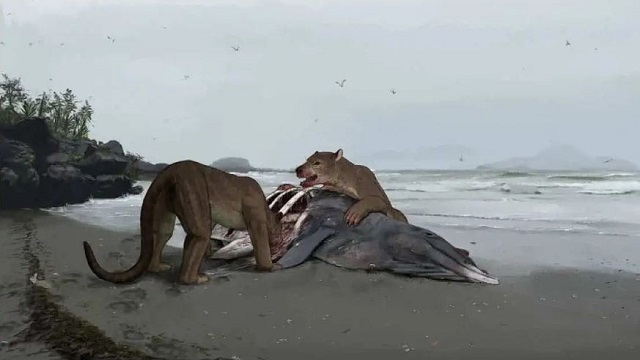 Scientists have discovered fossilized remains of a cross between a dog and a bear that roamed Europe millions of years ago.

Tartarocyon is an enormous animal that looked like a cross between a dog and a bear. It alludes to the large giant of Basque mythology.

The predator weighed more than 300 kilograms and lived in Europe 36 million years ago.

According to the researchers, the creature’s teeth were the most striking feature of the fossilized remains.

It has a distinct fourth lower premolar, unlike other Amphicyonidae specimens.

According to reports, the team discovered after studying a fossilized jaw that they thought belonged to a new type of “bear dog.”

Bastien Mennecart from the Natural History Museum Basel led the team. Bastien explained that the jawbone was discovered in 12.8 to 12 million-year-old marine deposits in the small community of Sallespisse in the Pyrenees-Atlantiques department of south-western France.

The fossilized jaw belonged to a group of predators known as “bear dogs,” which resembled “a cross between a bear and a large dog.”

This tooth is especially useful for determining species and genera. Similarly, the lower jaw examined is most likely a new genus.

Tartarocyon is its scientific name. Bastien attributes the name to Tartaro, a large, powerful, one-eyed giant from Basque mythology.