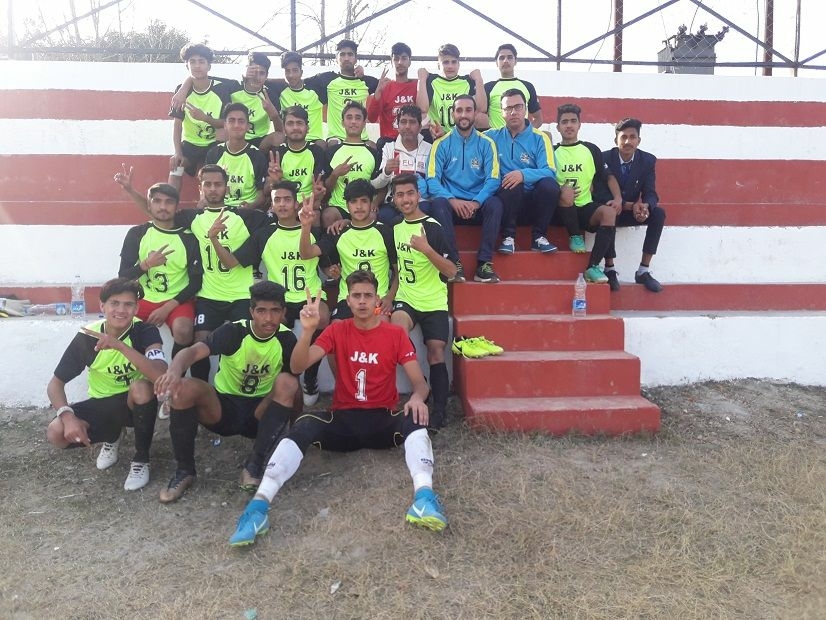 With legs crossed I take a sip of nun chai, while my eyes steer on the EPL table. I am nervous to look at once the invincible Arsenal’s performance. Be bold, or don’t be a fan. Arsenal is tottering at 6th position with D L W L W in the last 5 games. However, reading about the Gunners emphatic 5-1 drubbing of Everton on 4th February made the evening tranquil despite the hectic office day today. Another sip and I mull over whether Arsene Wenger will have to say good bye – Sooner or later? To me, of course, yes.
As I surf through the sports web, good news struck the eyes. It is the news that J&K U-19 team wins the semi-final against mighty Chandigarh 1-0 in the Junior National Football championship at Unakhad, Himachal Pradesh on 4th February, 2018.

Gosh, we are into the final! If seniors could not do it, at least, juniors did. Moreover, it is history made! For the first time, U-19 team has reached the final of a national level tournament. It has been 42 years since the state U-19 team reached the semi-final, only to lose it then. It was in the year 1976 when the J&K state hosted the BC Roy tournament; J&K U-19 team reached the semi-final, which they ultimately lost against Hyderabad (1-0). The match was played in the jam-packed Bakshi stadium and the state team was led by famous footballer Mohammad ShafiNari and also included famous players like late Mohammad Haneef, Bashier Ahmad Beigh, Mukhtar and Massarat etc.
For the finals, I was as anxious as the whole football fraternity. The final match was to be played at H.P Unakhad play field on 6th February against the mighty Jharkhand state team, which during the group stages had humiliated Pondicherry with 21-0 win. I wished I could visit the venue along with the long list of veterans who had rushed to Himachal to provide the much needed support to the young heroes. To boost the morale of the team, legendary Abdul MajeedKakroo, Pro-license coach Hilal Parray, District Football Association – Srinagar president Fayaz A. Sofi joined the team before the maiden final match.

THE TOURNAMENT
The Junior National Football Tournament for the B.C. Roy Trophy was instituted by the All-India Football Federation in 1962. The Indian Football Association presented this trophy in the memory of former West Bengal Chief Minister Dr. B.C. Roy. The then president of the IFA, M. Dutta Ray also the runners-up trophy, Mohan Dutta Ray Trophy. The tournament is restricted to the players under 19 years.

2017-18 Dr. B.C. Roy Trophy (Tier-II) was hosted by the hill state of Himachal Pradesh between 28th January – 6th February, 2018. A total of 15 state/UT teams participated in the tournament. The teams were divided in four groups (Group A,B,C of 4 teams each and Group D of 3 teams). J&K team was placed in group D along with Manipur and Daman & Diu. 16th team-Lakshadweep did not participate.
During the group stage, J&K was lucky to get a walkover in the first match against Lakshadweep. In its 2nd match played on 31st January, J&K team hammered Daman & Diu with a thumping 3-0 win. For J&K, forward Adeel scored 2 goals in the first-half, followed by another goal by right-out Subail. In the 3rd against Manipur, Shakir scored a scintillating 25-yard free-kick in the first 10-minutes which left the opponent astonished. In the second half, Manipur retaliated by scoring a goal due to a defender error. The match ended in a 1-1 draw. At the end of the group stage both Manipur and J&K held 4 points each, but J&K qualified for the semi-final on the basis of goal difference (3-1).
In the semi-final match on 4th February played against the strong Chandigarh, J&K team emerged the winners the final score of 1-0. The solitary goal was scored in the second-half by the charismatic mid-fielder Shakir, who is emerging as one of the best mid-fielders of the state. It was another majestic free-kick from the centreline reminding the viewers of the great Roberto Carlos. With this win, J&K U-19 team created history by qualifying for the finals.
The final match was more than a thriller. It was kind of a simulation of 18th FIFA World Cup (2006) finals played between Italy & France which also was decided on the penalty shootouts (although the match is famous for ZinadineZidan’s head butt on Marco Metarazzi more than anything else). Despite the J&K team playing it heart out, the match ended with a 4-3 win by Jharkhand in the penalty shootouts.

The first half of the final match saw J&K team toothless and Jharkhand dominated all parts of the game. Thanks to a gross goalkeeper error, at the half-time, J&K team was trailing by 2 goals. But heroes are those who survive the difficult times. At the whistle of 2nd half, some tactical changes proved beneficial and J&K team gained momentum with the help of mid-field. It bounced back by pumping in a streak of 3 goals – 2 goals by Shakir 2 and another by Adeel Tariq and the cup was almost in the bag. However, nervousness in the last moments of the game helped Jharkhand put in the equaliser and the regular time ended with scores tied at 3-3.
The extra time did not yield any decider either, notwithstanding strenuous football of 30-minutes. Both the teams put up a good show of defensive football to push the game into the nail-biting finish through penalty shootout.
Tie-breakers –test to the nerves, resulted Jharkhand to emerge as winners by a margin of 1 goal (4-3). Despite conversion of penalties kicks into goals by Shakir, Hayat, Adeel and also a precious save by the goalkeepRitik, miss-hits by Afreen and Ateeb let the J&K team down. Pertinently, Jharkhand team emerged as the highest goal scorer of the tournament as it scored 21 goals in a single match against Pondicherry.
According to Sajid Dar – Technical Director, State Football Academy, credit for the performance of the U-19 football team goes to the J&K Football Association which has successfully lured private participants for establishing professional football clubs. Furthermore, State Football Academies launched by the J&K State Sports Council has also complemented the efforts of J&K Football Association by establishing the State Football Academies at district level, which besides handpicking the raw talent spread across the state have also imparted standard training programmes to the budding players. Moreover, newly formed professional teams like Lone Star FC, Real Kashmir FC, State Football Academy FC teams has induced competition at peer level, which has led to improvement in the football skills and endurance. This has been supplemented by the participation of these teams in the I-league tournaments, which has provided the much needed exposure to the state players.
Hilal A. Parray, A Pro-license football coach attributed the performance of the U-19 team to the efforts put in by all the stakeholders including J&K Football Association, J&K Sports Council, Coaches, Managers etc. over the last 4-5 years to improve the quality of football at grass-root as well other categories. He also appreciated the private clubs including Lone Star FC and Real Kashmir FC for channelizing resources into the game, which has resulted in uplifting the standard of football in the state. Furthermore, exposure at national-level platforms including I-league has given much needed impetus to the players to lift their individual games and also inculcated professional attitude towards football. According to Hilal, till recently most of the players lacked the confidence to face tough opponents, but I-League exposure has changed the players’ psychology altogether. He firms believes that if all the stakeholders work together, very soon state would be a strong contender of Santosh Trophy and other coveted national-level tournaments.
Ex-footballer and coach of the U-19 Nazir A. Sheikh and Manager Bilal Ahmad Punjabi credited the whole team for the success. They opined that despite injuries and proper nutrition concerns, the players did not hold back and assumed responsibilities selflessly. Besides, friendly approach of the management with the players also boosted the morale of the team and the result is obvious.
To sum up this historical performance, apart from making a mark on the national level, J&K U-19 team has qualified for Tier-I category of the ensuing tournament. Besides, this tournament has lead to the emergence of new sensations including Shakir (Midfielder) who emerged as the highest scorer for J&K with a total of 5 goals including a penalty, Adeel (Striker) who scored a total of 4 goals and Subail. The captain of the team –Rishi apart from being the backbone of the defence line has also lead the team well. Above all, it has instilled the confidence among all stakeholders that we can win the next edition of the tournament!
Technically, it is an indicator of the fact that structural change in the game at grass-root level is beginning to bear the fruits. It also signifies the contribution of private partnership in the form of professional football clubs like Real Kashmir FC, Lone Star FC etc. in uplifting the standard of the state football.
At last, I quote, “We are the world, we are the children, we are the ones who make a brighter day, so let’s start Giving”!

Author can be reached at [email protected]