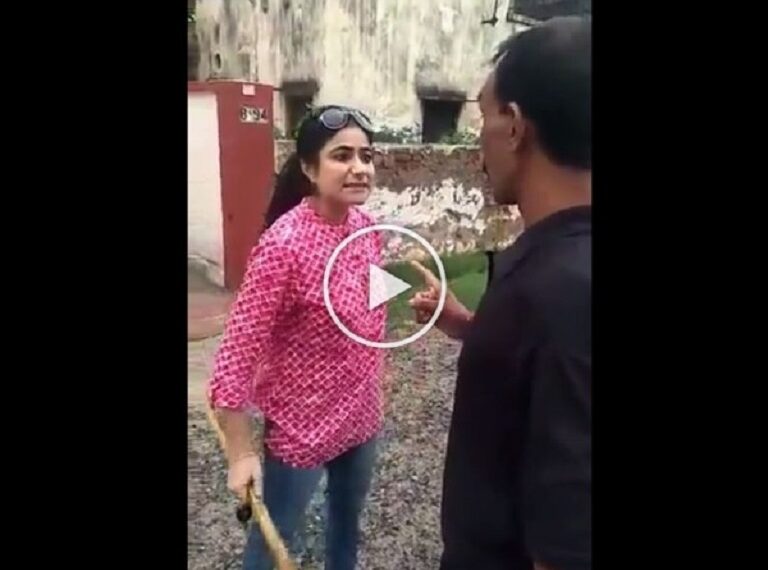 A vide of a woman thrashing a residential society security guard in Agra and hurling abuses at him for allegedly ill-treating stray dogs has gone viral on social media. Police have taken cognisance of the video and registered a case against the woman who claims to be an animal rights activist.

In the about 2.10-minute clip, the woman, who appears to be in her late twenties, is purportedly heard threatening the man that she will complain about him to BJP MP and animal rights activist Maneka Gandhi.

Superintendent of Police (City) Vikas Kumar said, “A video is going viral in which a woman was seen beating a guard with a stick. The Agra police has taken cognisance of the video and legal action is being taken.”

New Agra police station SHO Vijay Vikaram Singh said, “A complaint has been given by guard Akhilesh Singh working at the LIC officer colony. We have been trying to get the details of the woman who was seen beating up the guard in the viral video.”

The man works as a security guard in the LIC officer colony under New Agra police station. He is heard saying in the video that he was an ex-armyman. He says he was trying to shoo stray dogs away from the colony. Later, the woman released a video introducing herself as animal rights activist Dimpi Mahendru.

She claimed she has been working against cruelty to animals for the past 15-18 years. She added she got a call from the colony two-three days ago about alleged cruelty to dogs, but could not come as she was not in the town.

She also alleged the guard had killed a dog because it had littered in front of the building. “On Saturday also, I got a call about cruelty on dogs, and I arrived at the colony. The guard was seen beating dogs with a stick. I tried to stop him, but he began to beat me. I snatched his stick. He asked his friend to shoot a video of the incident. The guard was also mentally ill,” she says in the video.

The video has triggered a lot of reactions from netizens with most of them condemning the woman’s actions.

Another user wrote: “Administration should take strong action against the woman beating the guard with stick.We can’t expect this kind of behaviour by a teacher.Local leaders should take this matter to CM if administration ignore this case.”