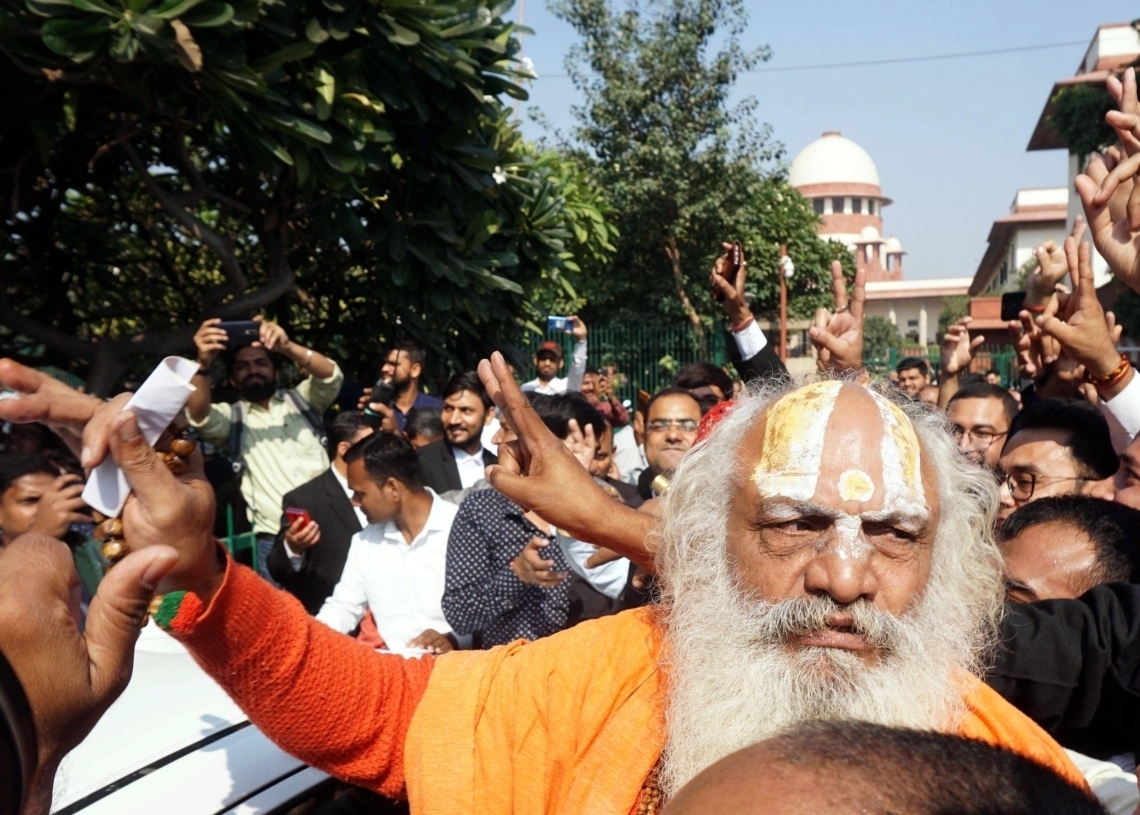 Mahant Sri Dharamdas of Panch Nirvani Ani Akhada coming out of the Supreme court after the judgment in the Ramjanmabhoomi-Babri Masjid (Ayodhya) land dispute case, in New Delhi on Saturday. Photo: Shanker Chakravarty

A new dawn for us: PM Modi
New Delhi, Nov 9: Prime Minister Narendra Modi on Saturday said the Supreme Court verdict on the Ayodhya land dispute should not be seen as win or loss for anybody, and appealed to countrymen to maintain peace and harmony.
In a unanimous verdict, the top court cleared the way for the construction of a Ram temple at the disputed site at Ayodhya, and directed the Centre to allot a 5-acre plot to the Sunni Waqf Board for building a mosque.
In a series of tweets in Hindi and English, Modi also asserted that the judgment clearly illustrates that everybody is equal before the law.
“Be it Ram Bhakti or Rahim Bhakti (devotion to Ram or Rahim), it is imperative that we strengthen the spirit of rashtra bhakti (devotion to the country),” he said, adding “the verdict shouldn’t be seen as a win or loss for anybody.”
Noting that the temple of justice (the apex court) has amicably concluded a matter going on for decades, he said the SC verdict will further strengthen people’s faith in the judicial system.
“The calm and peace maintained by 130 crore Indians in the run-up to today’s verdict manifests India’s inherent commitment to peaceful coexistence. May this very spirit of unity and togetherness power the development trajectory of our nation. May every Indian be empowered,” he said.
“Every side, every point of view was given adequate time and opportunity to express differing points of view,” he said.
“The judgment is notable as it highlights that any dispute can be amicably solved in the spirit of due process of law. It (the verdict) reaffirms the independence, transparency and farsightedness of our judiciary. May peace and harmony prevail,” he tweeted.
Modi on Friday had also appealed to the people that the priority should be to strengthen India’s tradition of maintaining peace and harmony after the verdict is pronounced on Saturday.
“The Supreme Court verdict on Ayodhya would not be a matter of victory or loss. My appeal to countrymen is that it should be our priority that the verdict should strengthen India’s great tradition of peace, unity and amity,” he had tweeted.
Later in the day, the PM while addressing the nation said that the verdict “has brought a new dawn for us.”
“Many generations may have been affected by the dispute but we must resolve that we make a new start for a New India,” he said.
“My dear countrymen! Today the Supreme Court has pronounced judgment on such a matter which has a historic background of several decades. The entire country felt that the case should be heard every day, and it was. That entire process is now at an end,” he said.
“The whole world already knew that India is the largest democracy but today it has been proven that it is also vibrant and strong,” Modi said.
The Prime Minister added that the way all categories of people “have accepted the verdict with open hearts, it shows the strength of our unity and national character.”
“After so many thousands of years, unity in diversity is very much in evidence. Today’s event and the way it has been played out will be a reference point. It is a golden chapter not just with respect to our unity but also our jurisprudence. SC heard everyone, with great patience, and to everyone’s satisfaction the verdict was unanimous,” said Modi.
He added that “November 9th was the day the Berlin Wall fell and two rival ideologies had united.”
“Today, we saw the opening of the Kartarpur Sahib corridor. Ayodhya verdict on this day, therefore, is telling us that the message from the date is to be united in harmony and amity. Anyone holding onto any bitterness, I request that they too give it up,” he said.
“To move forward with the confidence that we don’t leave anyone behind,” he said.
Mr. Modi says “Now as a society, every Indian has to work by giving priority to his duty, his duty. The harmony between us, Our unity, Our peace, Very important for the development of the country.”
The Prime Minister says “Today, with the decision on Ayodhya, this date of November 9 has also given us a lesson to move forward together. Today’s message is to add — to join and to live together.” (Agencies)

Neither provided equity nor justice: AIMPLB
New Delhi, Nov 9: After a five-judge Constitution bench of the Supreme Court allotted the disputed Ayodhya land to the Ramjanmabhoomi Trust, the All India Muslim Personal Law Board (AIMPLB) said Saturday that the verdict “neither provided equity nor justice”, and that it may file a review plea in the coming days.
Addressing the media outside the Supreme Court, AIMPLB secretary Zafaryab Jilani said, “The judgment has just been pronounced, it says a lot of things about the Constitution and about secularism. We are very dissatisfied with this judgment. Article 142 does not let you do this.”
Jilani was a part of the board’s legal team that fought the case in the Allahabad High Court and subsequently in the apex court.
Raising objections to certain parts of the verdict, Jilani said, “We are dissatisfied that the inner courtyard where prayers were offered was given to the other side. Neither equity nor justice has been served.”
“As per the Sharia law, we cannot give away a mosque; however, we will abide by the court’s verdict. There is no evidence on what happened on that land between the 12th century and 1528. The Hindus claim that the temple was present since the Vikramaditya era but there is no evidence on that,” he said.
On the allocation of a separate plot of land for the Muslim community, Jilani said the decades-long dispute was about the mosque, and not about land.
“You cannot exchange land for a mosque; it was not about land but about a mosque. They have accepted that placing the idols in 1949 was desecration but the decision has still favoured the other party,” he said.
Jilani said that certain parts of the judgment “give an impression of further trouble in the future”.
Appealing for peace across the country, he said, “This is not somebody’s defeat or victory. We will adopt whatever legal course is possible. We appeal to everyone to maintain peace.”
The AIMPLB secretary, however, acknowledged that “parts of the judgment are very important for the secular fabric of the country”. “We may file a review petition within 30 days but we cannot say for certain now; a call will be taken after our legal team studies the judgment,” he said.
“We have a right to disagree with the judgment but will never say there was any pressure. Anybody can make a mistake. The top court has reviewed its judgment in many cases. If the working committee wants, we will go ahead with the review petition,” he added.
Rescuing image, claiming ownership: Why Facebook has a new company logo
Speaking on similar lines, advocate S R Shamshad said, “It seems that the court has exercised extraordinary powers to confer title, which we object to. This is a questionable judgment.”
He added, “It was necessary to fight this because we had to tell the world that we didn’t like the way the mosque was treated. We hope no future mosques will be touched; this is our expectation in a democratic country in a constitutional setup.”
Addressing the media later, Hyderabad MP Asaduddin Owaisi, who is also a member of the board, said: “In my personal opinion, we should reject the five-acre land because this is a legal fight. As former CJI Justice Verma said, the top court is supreme not infallible. This country is becoming a Hindu Rashtra, they have started with Ayodhya, and will follow up with NRC, Citizenship Bill etc to that end.”
A visibly disheartened member of the board’s legal team described the verdict as “arbitrary” and said: “Is there really any point in asking for the review of a unanimous judgment? There is nobody who has dissented”.
Jilani said: “Article 142 does not allow you (SC) to do this. The court said that there is evidence of a 12th century temple but nothing to show what happened to that land between then and 1528. The Hindu side, on the other hand, claims that the temple is from Vikaramaditya’s era who was a contemporary of Jesus Christ but did not give any evidence for that.”