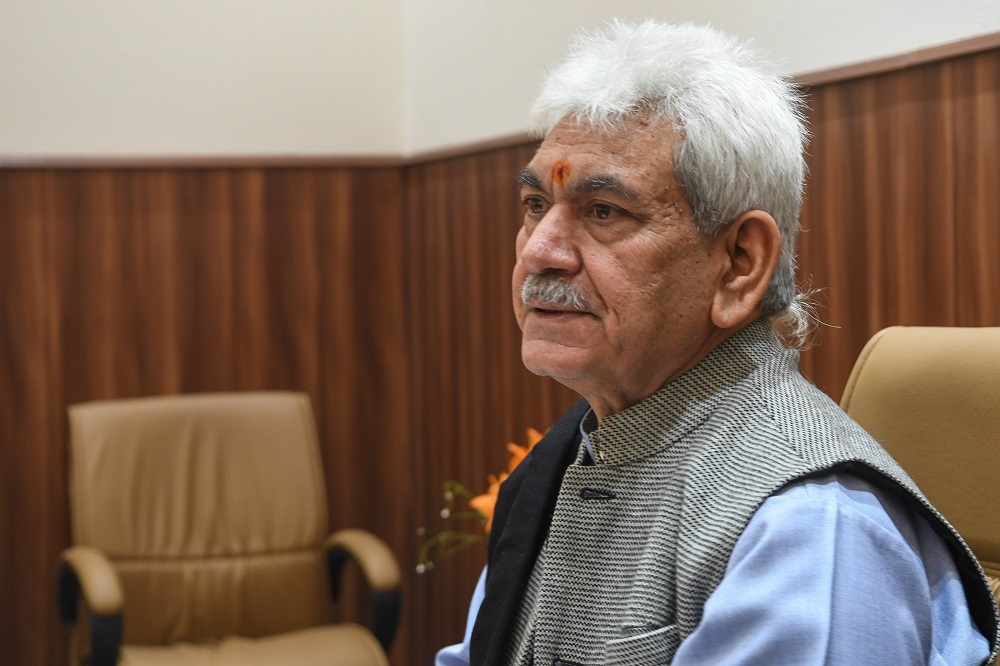 During the program which aired on Sunday on all local & primary channels of All India Radio (AIR) in the UT and broadcast on the Channel DD Kashir, the Lt Governor connected with the people and dedicated this month’s episode to all those citizens who are working for the betterment of the society, and emerged as role models for others.

The Lt Governor also congratulated the national topper of NEET-UG Tanmay Gupta and cricketer Umran Malik and termed them as the new role models for the younger generation of J&K.

Our great nation will be celebrating 72 years of the adoption of the Constitution of the world’s largest democracy on November 26. Today, when the world’s oldest civilization and rich cultural heritage is moving towards becoming an economic superpower, it is absolutely necessary that the evils and the class differences plaguing it must be completely removed, observed the Lt Governor.

Whatever we are creating, we must lay a solid foundation for a society full of self-dignity, self-respect, and prosperity. Working in this direction, the UT Government, in the last 16 months, has tried to establish a new transparent, accountable, people-centric governance system. Efforts have been made through active programs towards the empowerment of the general public, said the Lt Governor.

Referring to the suggestion received from Faisal Yousuf regarding creating an environment of self-employment and inviting the young and promising entrepreneurs to schools for guest lectures, the Lt Governor said that such interactions with the students will ignite and propel the spirit of entrepreneurship in the young minds.

Responding to the suggestion of Yasir Ahmad Laway regarding the strict implementation of biometric attendance in the field offices, the Lt Governor observed that the insight received bodes well with the administration’s commitment to usher in an era of transparent and accountable governance culture in the region.

The Lt Governor, while mentioning Mohd Iqbal Badana and Shafeeq Ahmed, both of whom shared a roadmap for strengthening the Panchayat Raj Institutions, said that their suggestions complement the endeavor of the administration to enhance the capacity of the democratic institutions at the grassroots level.

Several landmark decisions of the Government are steering people’s empowerment, taking J&K towards new heights of development and prosperity, the Lt Governor said. For the first time in the history of Jammu and Kashmir, 7000 recruitments have been done on merit basis, in a transparent manner, which is a living example of how corruption-free, transparent and just system contributes to the progress of the marginalized class, observed the Lt Governor.

Another major decision taken by the Government is the one-time age relaxation in the recruitment exam for the post of Sub- Inspector, JKP, and the increase in the number of seats which has the potential to usher a wave of development and prosperity in the society. I wish the very best to the aspirants, the Lt Governor said.

Similarly, ‘Har Ghar Dastak’ Campaign has been launched to cover all unvaccinated cases, besides ensuring sensitization regarding importance of Covid Appropriate Behaviour (CAB), he added.

Following the ideals of the Hon’ble Prime Minister, we have introduced digital initiatives to bring more transparency and reduce the gap between the system and the service, for the convenience of the common citizen. Such interventions will go a long way to ensure that benefits of the public welfare schemes are being made available to the people so that every citizen can live a dignified and prosperous life in a harmonious and progressive environment, said the Lt Governor.

J&K administration is trying its best to strengthen the democratic system at the grassroots level; encouraging public participation in the development process; implementing principles of Good Governance; providing inclusive, qualitative education to all; creating more livelihood opportunities for the youth; taking industries to the block level, besides making all the public services easily accessible to the people of J&K, the Lt Governor observed.

The Lt Governor also made a special mention of the suggestions received from Sachin Padha and Aditya Sharma, regarding strengthening of the complaint management system to improve governance, and ways and means to promote Hindustani Classical music, respectively.

During the program, the Lt Governor appealed to the people to take a pledge to work collectively and strengthen their resolve to build a new, prosperous and self-reliant Jammu and Kashmir.

The Lt Governor also requested those who have not been vaccinated yet to get vaccinated at the earliest and contribute to the Government’s efforts in defeating Covid pandemic.