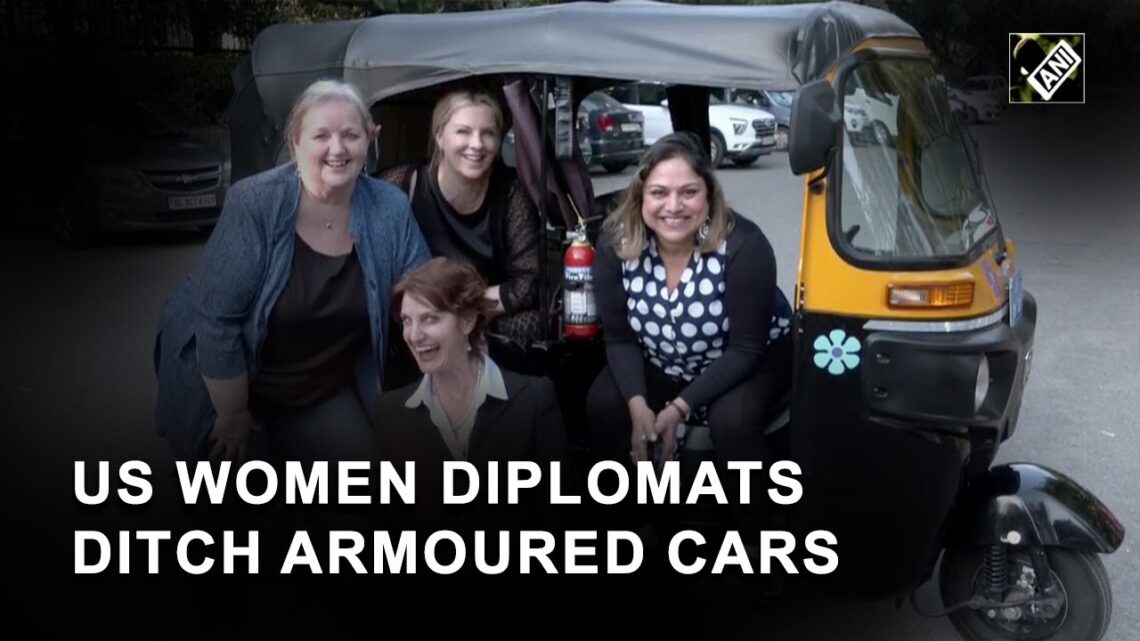 New Delhi: Four US woman diplomats are trying `auto-rickshaws’ to carry out work in New Delhi

Ann L Mason, Ruth Holmberg, Shareen J Kitterman, and Jennifer Bywaters love to go with their Black and Pink three-wheelers by driving themselves for all their work including the ‘official trips’.

These diplomats have taken to the common man’s commute not just for fun, but also to set an example.

Speaking to ANI, the diplomats shared their experience of learning this distinct mode of transport and how diplomats driving the auto-rickshaws is a rare exception!

“From Detroit to my auto rickshaw, I’ve had a lifelong love of vehicles and so everywhere I’ve been there’s been something special about a vehicle but none more special in my opinion than an autorickshaw. When I was in Pakistan, before coming to India, I was in armored vehicles and they were big, beautiful vehicles. But I would always look out on the street and I would see the autorickshaws going by and I always wanted to be in the autorickshaw. So when I got to India and had the opportunity to buy one, I took it immediately,” said Ann L Mason to ANI.

“For me it was terrifying. Yes, learning to drive the autorickshaw was completely new for me. I had never driven any vehicle with a clutch, never driven a motorcycle only automatic cars, my whole life,” she said when asked about how hard was it to learn, maintain an auto, and get a license.

“My inspiration is my mother, my mother always took chances. She traveled around the world, she was in the Vietnam War and she did so much with her life. Life and she always taught me to do interesting things and take a chance because one you might not get another opportunity and two you never know what you might experience. My daughter also drives the autorickshaw and so learning from them every day, the interesting things that how they see the world,” she added.

Her personalized black autorickshaw has a Bluetooth device and a curtain printed with the image of a tiger. She has taken special care to personalize her autorickshaw, nicknamed KITT, in homage to the 1980s show “Knight Rider”.

Shareen J Kitterman, born in the south Indian state of Karnataka and holding US citizenship flaunts her pink autorickshaws with flower magnets, said that she was inspired by the Mexican Ambassador who too had an auto with a driver. She has also tied colorful tassels to both sides of her auto and stuck flags of the United States and India near the windshield.

“When I was in the US planning to come to New Delhi, I’d heard about the Mexican Ambassador. Ten years ago, she had an auto and she had a driver. That’s when I started thinking about it. When I came here, I saw Ann who had an auto, so when I own an auto, I want to drive it. So, that was my whole goal,” said Shareen.

Mexican Ambassador Melba Pria was the one who started the trend when she made a white-colored rick her official vehicle.

On being asked that about the celebration of 75 years of relationship between both countries and she sees herself bridging the gap, Shareen said that she understands the Indian and the American way of functioning and that the embassies show respect for each other’s culture.

“It’s truly an honor to be able to serve my adopted country in the country of my birth. All my experiences growing up in India and then being an immigrant in the US and then naturalizing and becoming a diplomat are all the various experiences that I feel I bring to my personal and professional life. I get involved in many projects because I feel like I can truly form that bridge. I do understand the Indian way of thinking and functioning, and I also understand the American way. So, one of the simple things I’ve done in the embassy is a lot of work notices, management notices used to be published in English only and now we publish both in English and Hindi. I think it’s my way, and our embassy’s way of showing respect for the culture and language of the local staff as well at the host country,” added Shareen.

Discovering the hustle and bustle of the city, Ruth Holmberg with her ‘black beauty’, goes to the market and meets people which she called her way of ‘diplomacy’.

“I enjoy driving the auto very much and I love it when other women see that I am driving it and I like that they see this possibility for them as well. For me, diplomacy is not all that high level. Diplomacy is people meeting people, people getting to know each other, and getting a chance to build relationships and that’s what I can do with the auto. I meet people every day. On my way from my work, going to the market. I know the vendors in my area, and I know people in the market .. they are all excited to see me at the market with the auto. They come and introduce themselves and with that, I can build that one-on-one relationship, and I think that is a very important part of diplomacy,” said Ruth Holmberg from inside her black rick.

Explaining the experience of her journey, Jennifer Bywaters said that she got to see the good side of the people on the road who helped her and you need to have fun and be brave enough to think out of the box.

“When I got to be in Delhi, I met Ann and after riding in her auto, I decided that I needed this vehicle too. I get to see the local perspective, more of the humanity. Some of the people helped me since I started driving the auto-rickshaw and so I saw the good side of the people in Delhi,” said Jennifer.

Accustomed to the riding, she added that the hardest part was navigating around other auto-rickshaws but learning how to drive wasn’t difficult.

“Learning wasn’t difficult. I am used to driving a clutch so that part was easy and the hardest part of driving in Delhi is navigating around animals, bicycles, and other auto-rickshaws. But I would say that have fun and be brave! Think outside the box and you do not need to do things as they have always been done,” she added. (ANI)