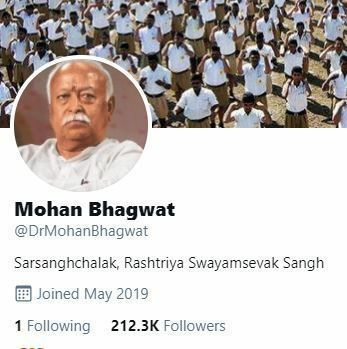 Earlier in the day, the blue tick from Vice President Venkaiah Naidu’s Twitter handle was also dropped due to inactivity. Twitter removed and later restored the verified blue tick on the personal account of Venkaiah Naidu.

RSS chief Bhagawat, his colleagues Suresh Soni, Arun Kumar, Suresh Joshi and Krishna Kumar were among the accounts that lost the verification badges, according to a report by NDTV.

The blue tick purge has set up a new flashpoint between the government and Twitter, who have been in an escalating standoff since the social media company classified certain posts by a few BJP leaders targeting the opposition Congress as “manipulated”.

On Saturday, Twitter was given a final chance to appoint India-based officers following the country’s new rules for social media companies, failing which it will face “consequences”, the government said on Saturday amid an escalating standoff with the platform.

“Twitter Inc. is hereby given one last notice to immediately comply with the Rules, failing which the exemption from liability available under Section 79 of the IT Act, 2000 shall stand withdrawn and Twitter shall be liable for consequences as per the IT Act and other penal laws of India,” the government said.

Naidu’s blue tick was restored within a few hours, reportedly when objections were raised by the Vice President’s office. The Ministry of Electronics and IT is likely to issue notice to Twitter asking why this was done without “prior intimation”.

Like Naidu, the verification badges for the RSS functionaries were dropped for “inactivity” amid a recent revival of the verification process after a pause of few years that has seen Twitter review verified accounts and withdraw blue badges from inactive ones, the NDTV reported.

Twitter had confirmed the policy earlier in the day when asked about the move on Venkaiah Naidu’s personal account, saying it had been inactive since 2020 and no one had logged in in the last six months.

The stance signalled a further deterioration of ties between the government and Twitter who have clashed over a range of issues including its stand on new digital rules for social media sites and the discrediting of BJP leaders’ tweets.