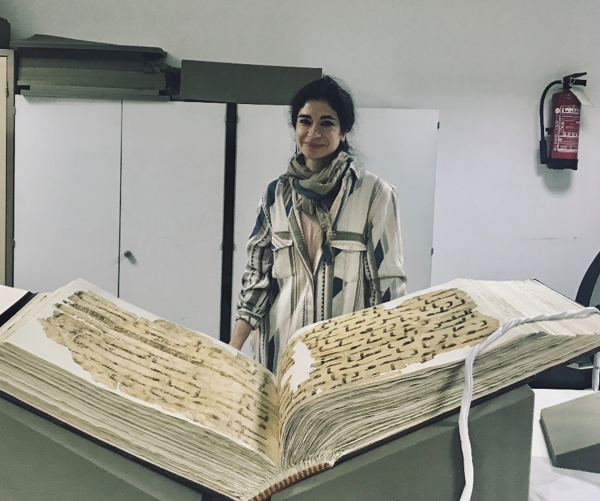 A copy of the Holy Quran hand-written by Hazrat Usman (RA) and stained with his blood has been unveiled in Egypt.

Eléonore Cellard, a French scholar and researcher who specializes in Arabic paleography and codicology, particularly Quranic manuscripts, gained rare access to the National Library of Egypt and unveiled the rare gem.

“After years of attempts to gain access to the collection, I finally received permission to view a very special manuscript: a monumental Quranic copy (mushaf in Arabic) written during the early centuries of Islam and discovered in the oldest Mosque in Cairo, which was built by ʿAmr ibn al-ʿĀṣ,” she wrote in The New Arab.

Moreover, this fascinating copy is thought to be one of the copies by Caliph ʿUthmān ibn ʿAffān, written in his hand and stained with his blood because, according to the Islamic historical accounts, he was assassinated while reading it.

“We open the book – freshly rebound by the National Library restoration team – and begin to delicately turn the pages. Unlike the very earliest known examples of the Quran, most of which are oriented vertically, the large leaves of our copy, although nearly square, are slightly horizontal,” she said.

“This may be evidence that it was produced later than other early Qurans, perhaps around the early 8th century CE. The first pages that we turn in are written on paper. A note says that they were manufactured in 1830 to complete the missing parts of the manuscript as part of a restoration sponsored by the Khedive Muhammad ʿAlī Pasha.”

During the second, somewhere between the 12th and the 18th centuries CE, the manuscript was completed with leaves taken from another distinguished copy, perhaps a Fatimid Quran.

This particular attentiveness through the centuries illustrates the fact that our copy, unlike thousands of damaged early Quranic manuscripts, never fell into oblivion within the Muslim community. Why did this copy receive such close attention?

“In 2019-2020, I was fortunate to receive a grant from the Bureau Central des Cultes (Interior Ministry) in France to investigate the history of this manuscript. Indeed, over time, its leaves have become separated and are housed in a variety of locations. How and why did this dispersal occur? In the early 19th century, Cairo was known as a place where one could acquire every kind of antique object, including manuscripts,” she wrote.