All the king’s men 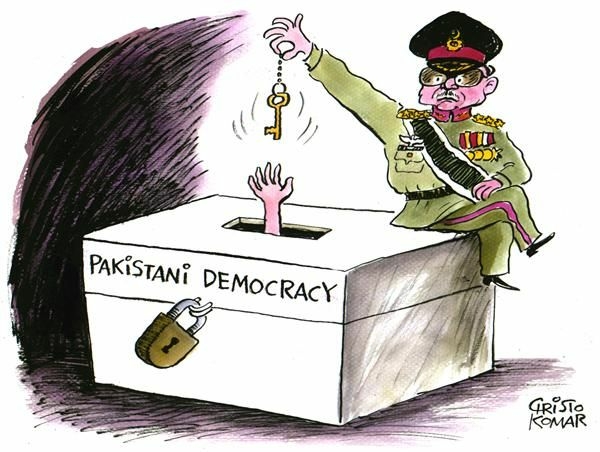 Elections in Pakistan are all set to take place exactly two weeks from now. It is quite clear that two of the largest political parties in the country – the Pakistan Muslim League (Nawaz) and the Pakistan Peoples Party – are being pushed against the wall while the establishment’s new favourite party, Imran Khan’s Pakistan Tehreek-e-Insaf, is being propped up.

The former PPP senator, Farhatullah Babar, put it aptly when he said, “Seldom before has the pre-poll process been so vitiated, so unfair and so grotesque. The invisible political engineers seem desperate for a fragmented and divided parliament that is easier to manipulate.” He added that “a silent coup has taken place, far softer and subtler than any previous coups”.
Babar is, of course, referring to the manipulation of the electoral process which is taking place behind the scenes by those who must not be named. Both the PML-N leadership and the PPP leadership have said on several occasions how these elections are not going to be free and fair because there is no level playing field. Khan’s PTI is being favoured along with some independent candidates as they are willing to play ball with the establishment if they form the next government. Yesterday, the director-general of the Inter-Services Public Relations, Asif Ghafoor, held a press conference in which he said the armed forces have “no direct role in the conduct of elections”. He dismissed allegations made by political parties about rigging. What is interesting is the timing of this press conference. Also, such explanations are indeed quite telling.
Last week, the former prime minister, Mian Nawaz Sharif, was sentenced to prison in the Avenfield reference case along with his daughter, Maryam Nawaz, and son-in-law, Captain (retired) Safdar. Sharif got a 10-year jail sentence while his daughter got seven years, and her husband received a one-year sentence. Safdar was arrested on Sunday. Sharif and his daughter are in London because of Begum Kulsoom Nawaz’s cancer treatment. The father-daughter duo has announced that they will return to Pakistan this Friday, July 13. According to reports, they will be arrested upon their arrival in Lahore. While an accountability court has handed out these sentences in a corruption case, there is little doubt that it has nothing to do with Sharif’s alleged corruption. Accountability in Pakistan is hogwash. Those who are in the establishment’s good books are never made accountable. It is no secret that Sharif was once the blue-eyed boy of the military establishment. In fact, the establishment led to his swift rise in politics. He only fell out with the ‘boys’ when he tried to snatch power from the military. The rest, as they say, is history. He is now being hounded for his perceived sins and those sins are not related to corruption. Among other things, his sins include the trial against the former army chief, General (retd) Pervez Musharraf; his attempt to steer the country’s foreign policy away from the military rather than toeing its line and his bid to normalize relations with India. He is paying the price for crossing those red lines.
On the other hand, the PPP is also being hounded close to the elections. It is not yet clear what led to this. Up until a few weeks ago, things seemed hunky-dory for the PPP. Then started the PPP’s election campaign. Shaheed Mohtarma Benazir Bhutto’s son, Bilawal Bhutto Zardari, started his election campaign from Karachi. There was an unfortunate incident in his constituency in Lyari when his convoy was pelted with stones by a few miscreants. This did not deter him. He continued his campaign in Sindh. It must be mentioned here that the PPP chairman, Bilawal Bhutto, has been extremely vocal about media censorship, controlled democracy, missing persons and other such issues in his election campaign. After his overwhelmingly successful campaign in Sindh, Bilawal Bhutto started campaigning in South Punjab. First he was stopped by the Punjab police from entering Uch Sharif on the pretext of security clearance. A couple of days later, he was stopped by the district management of Multan from addressing rallies there. While Bilawal Bhutto did eventually go to Uch Sharif and also addressed rallies in Multan, these ‘obstacles’ clearly point to something else. While these may be minor deterrents, the real problem for the PPP is a money laundering case involving former president, Asif Ali Zardari, and his sister, FaryalTalpur. They have both been summoned by the Supreme Court on July 12 and have also been stopped from leaving the country. Some say the powers that be are not happy with the PPP’s campaign momentum as it seems that they will bag enough seats to be in a position where the next government would have to be formed with their support, while others say that this has to do with an alleged deal gone sour between Zardari and the establishment. Whatever the reason, it is now apparent that they are not on the same page any more.
Another alarming development is the mainstreaming of militant organizations and extremist religious parties in these elections. According to a report in the Dawn newspaper, Khadim Hussain Rizvi’s Tehreek-e-Labbaik Pakistan is at number three in terms of the number of candidates in Punjab – after the PTI and the PML-N – and it has also fielded over 100 candidates for the National Assembly seats from Punjab. According to the same report, the Allah-o-Akbar Tehreek has fielded more than a hundred candidates in Punjab and 50 for the National Assembly seats. The AAT is the new name of Hafiz Saeed’s Milli Muslim League.
The 2018 general elections are going to be one of the worst elections in Pakistan’s history. With political engineering at its peak and dissenting voices being dealt with through threats, harassment and other means, there is little chance of a fair outcome. The democratic process in Pakistan is in trouble once again. Let’s hope it survives this ‘silent coup’.