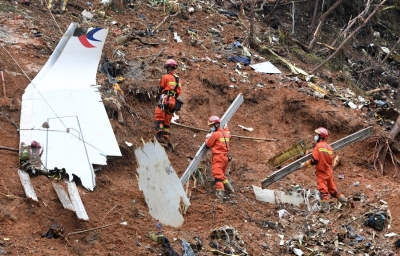 Nanning : All 132 people on board China Eastern Airlines’ plane that crashed in south China’s Guangxi Zhuang Autonomous Region were dead, an official has announced.

“It is with great sadness that we here announce that the 123 passengers and nine crew members on board China Eastern Airlines Flight MU5735 on March 21 have all died,” said Hu Zhenjiang, Deputy Commander of the headquarters and Deputy Head of the Civil Aviation Administration of China.

According to the requirements made by the Communist Party of China Central Committee and the State Council, the headquarters has organised personnel from multiple departments, including fire fighters, soldiers, armed police, public security, health and quarantine, to carry out massive research at the crash site for the past six consecutive days, he added.

Together with experts’ analysis of video contents in various monitoring and recording equipments, the key data recorded by facilities such as the air traffic control radar, and particularly the wreckage distribution at the crash site, it can be determined that there have been no signs of life at the crash site, Hu said.

So far, identities of 120 victims of the plane crash have been confirmed through DNA testing.

The China Eastern Airlines Boeing 737 aircraft, which departed from Kunming, capital of southwest China’s Yunnan province and was bound for Guangzhou, capital of Guangdong province, crashed into a mountainous area in Tengxian County, Guangxi at around 2:38 p.m. on Monday.

In the next step, more efforts will be made to search for the remains of the victims and the wreckage of the plane to provide strong support for the following investigation and evidence collection, said the Deputy Head of the Civil Aviation Administration of China.

The official also pledged efforts to properly handle the aftermath.

“We are deeply saddened by the accident. We mourn the loss of 132 lives and express our deep sympathy to the bereaved families.”

All attendees of the press conference stood in silent tribute to the dead in the plane accident.

“Our hearts are heavy. We have been searching the place where the plane crashed and the surrounding hilly areas for days, expecting a miracle,” Li Shaolin, Head of a firefighting team in Guilin city.

Besides a number of wreckage pieces, rescuers have recovered one black box — believed to be the cockpit voice recorder — and are still searching for the second black box, or the flight-data recorder. The data downloading and analysis work of the recovered black box is underway.

A physics and chemistry laboratory of the public security authorities have tested 41 samples out of 66 from the crash site and found no major ion components of common inorganic or organic explosives, said Zheng Xi, Head of the fire brigade of the Guangxi region at a press briefing on Saturday afternoon.

Several thousand people have joined the search and rescue efforts. Drones and other equipments were also used in the operation.