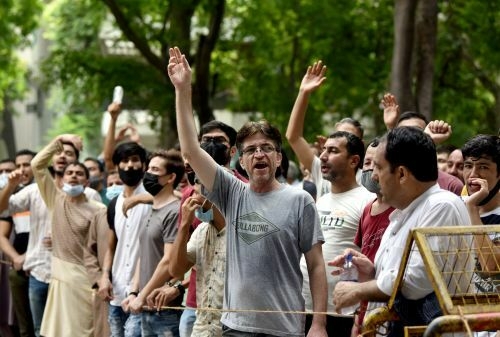 The Delhi High Court Wednesday expressed concern over a large gathering of Afghan nationals protesting outside UNHCR office and seeking refugee status, saying it could act as a super spreader of coronavirus as there is lack of adherence to COVID-19 appropriate norms.

The high court said the situation cannot be permitted to continue as the protestors could be seen sitting and standing next to each other without even wearing masks and asked the authorities to act on it.

Justice Rekha Palli asked the Centre, Delhi government and police to coordinate on how the issue can be resolved and to see the gathering does not act as a super spreader of COVID-19.

The high court issued notices to the ministries of Home Affairs and External Affairs, Delhi government, Delhi Police, South Delhi Municipal Corporation and Delhi Jal Board on a petition by Vasant Vihar Welfare Association which stated that the foreign nationals (refugees/ asylum seekers) have gathered outside the office of the United Nations High Commissioner of Refugees (UNHCR) at B Block in South Delhi’s Vasant Vihar since August 15, including lanes and parks adjoining it and residents are facing difficulties due to this.

The point is that the general public is suffering because of this, the court said and asked the Delhi government to inform what it has done in pursuance to the Supreme Court’s direction to frame guidelines on the issue of the right to protest so as to ensure a balance between fundamental rights and the maintenance of law and order.