Acer introduces four new Chromebooks; two for Business users and one is a 15-inch convertible 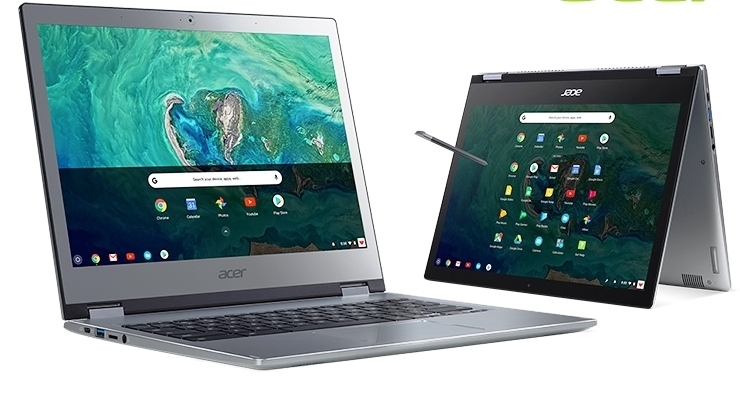 Acer has launched four new Chromebooks at its event in New York, and two of these are premium 13-inch laptops design for business use. The 15-inch Chromebook is a convertible and comes with a 13-hour battery life, according to Acer and will also be more budget friendly. The two 13-inch laptops are more premium in terms of pricing and powered by the latest Intel 8th generation Core processors.

Starting with the Acer 13-inch Chromebooks, these are designed for enterprise use case and come with an all-aluminum chassis, though the company says these are durable, thin and light. The display aspect ratio is 3:2, rather than the traditional 16:9, which Acer claims will ensure more vertical space and reduces the need for scrolling while editing documents, etc. They also come with a dual USB 3.1 Type-C Gen 1 port for charging and data transfer.

The convertible Chromebook Spin 13 (model number CP713-1WN) sports a 360-degree hinge and can be used as a tablet, notebook, display or in the tent-mode. There’s also a Wacom stylus (for pen input), which can be stored in the device slot itself. Acer Chromebook 13 ( model number CB713-1W) has the more traditional notebook design for keyboard-heavy tasks, says the company.

Both the 13-inch Chromebooks comes with 13.5-inch Full HD+ display, which has a resolution of 2256×1504 pixels with IPS technology, and 178-degree viewing angles.The aspect ratio on both is 3:2. Acer claims with Chromebook Spin 13, the tablet mode feels like an actual magazine for a better reading experience. Both sport an aluminium chassis with diamond-cut effects on the edges. The touchpad has Corning Gorilla Glass touchpad for smoother navigation. They also come with dual microphones to improve the video calling experience, says Acer.

Acer has also included a legacy USB 3.0 port and a MicroSD card reader on both laptops, which should reduce the reliance on adapters to some extent. Connectivity options are WiF 2×2 MIMO 802.11ac and Bluetooth 4.2. Coming to the battery life, Acer Chromebook Spin 13 has one of up to 10 hours.

Acer’s first 15-inch convertible Chromebook also supports a 360-degree hinge. Acer is also launching another Chromebook 15 (model number CB315-1H/1HT) which has 15.6-inch display and 14-hour battery life at a more budget-friendly price, though without the 360-degree hinge. Acer’s Chromebook Spin 15 has a 1080p IPS display which is touchscreen enabled, two full upward-facing speakers for enhanced audio and a full-sized keyboard.

The 360-degree hinge allow the touchscreen display to be rotated until it is completely open and ready for use as a large tablet. The Chromebook Spin 15 is heavy though at 2.1 kgs. It will be powered by the Intel Pentium N4200 processor, Intel Celeron N3450 processor, or the dual-core Intel Celeron N3350 processor with options of 4GB or 8GB LPDDR4 RAM paired with either 32GB or 64GB onboard storage. It also has WiFi, Bluetooth 4.2 and a 720p HD webcam. Ports on the Acer Chromebook Spin 15 are two USB 3.1 Type-C Gen 1 for data transfer, charging the device, etc. It has two USB 3.0 ports and a MicroSD card reader as well.