Abu Ghraib: The legacy of torture in the war on terror 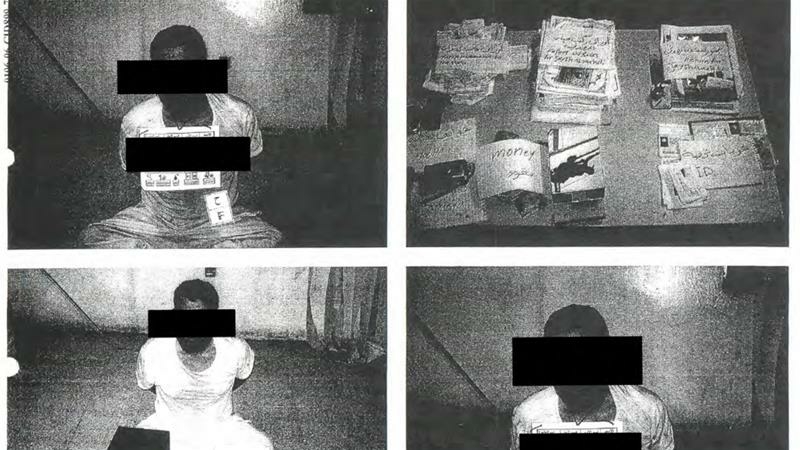 “America is the friend of all Iraqi people.” This was the sign put up at Abu Ghraib prison – one that replaced Saddam’s portrait when the US took it over as part of the war on terror.

It was Abu Ghraib prison that introduced the world to the violent infrastructure of torture in the war on terror. In 2004, when photos emerged documenting extensive torture ranging from prisoners on leashes to bodies piled atop each other in pyramid structure to prisoners standing in crucifixion like postures, there were global shockwaves at the displays of brutality.

The prison, which was the site of massive torture, also housed a largely innocent population – approximately 70-90 percent of the prisoners were mistakenly detained, according to the Red Cross in a 2004 report (pdf).

With no end to the war on terror, the legacy of Abu Ghraib prison remains as important as ever, especially where a lack of accountability continues to permeate all operations in Iraq.

In 2004, when the Abu Ghraib scandal first emerged, former President Bush responded saying that, “Under the dictator, prisons like Abu Ghraib were symbols of death and torture. That same prison became a symbol of disgraceful conduct by a few American troops who dishonoured our country and disregarded our values …”

Bush’s statement unveils a particular logic of the war on terror that continues to justify abuses to the present – moral equivalencies, and in particular, the US’s perceived moral superiority of itself in the way it fights war. That’s why prisoner abuse under Saddam was torture, but under the US it is simply “disgraceful conduct”. That’s also why Bush can talk about “our values”, despite knowing that a series of torture memos essentially provided the rationale to abuse prisoners – that anything short of organ failure or death would, according to his administration’s new definition of torture, fall short of it.

Though former President Bush appeared “shocked” when the Abu Ghraib scandal first broke, Eric Fair, a former CACI contractor, in an interview with Democracy Now, on the unveiling of his book, “Consequence: A Memoir” on his time at Abu Ghraib stated that he was “shocked that the American people were so shocked and that they had this kind of idea or that they were so ignorant about what was going on”.

For the United States in the war on terror, accountability has meant little other than prosecuting the so-called ‘bad apples’ who conduct torture and/or murder in order to make the point that they are an aberration, not a product of a system-wide policy of sanctioned abuse in the war on terror.

There are different ways to understand the role of shock when it comes to Abu Ghraib. On the one hand, “shock” at abuses underscores the false American narrative of the protection of human rights and “our values” in how we engage in conflict with others. On the other hand, shock at not knowing about abuses can perhaps be attributed to the documentary role of the Abu Ghraib scandal in participatory humiliation – in this case, humiliation of Muslim prisoners provoked by Islamophobia that allows the American public to engage in their torture vicariously as a collective act of vengeance for the 9/11 attacks. Described another way, as Dora Apel writes (pdf), “the viewer is meant to identify with the proud torturers in the context of the defense of a political and cultural hierarchy.”

Analysing the shock spectacle is important when it comes to understanding the US’s true intention to hold torturers accountable. To date, Abu Ghraib prisoners have seen little, if any, justice for the torture they endured. What, therefore does accountability mean for Abu Ghraib’s former prisoners?

For the United States in the war on terror, accountability has meant little other than prosecuting the so-called “bad apples” who conduct torture and/or murder in order to make the point that they are an aberration, not a product of a system-wide policy of sanctioned abuse in the war on terror. That’s why in the case of Abu Ghraib, “justice” has largely perceived to have been done over a decade ago, after 11 military personnel were convicted of various crimes including conspiracy, dereliction of duty, and maltreatment of detainees. But that has translated into little for the victims of Abu Ghraib’s torture.

On September 22, the question of justice for the at least some of Abu Ghraib’s victims and holding military contractors from CACI accountable was revived in a Virginia courtroom in the case of Al-Shimari v CACI et al where the Center for Constitutional Rights was challenging CACI’s motion to dismiss the case for their role in torture at Abu Ghraib.

This is of particular importance as CACI has largely evaded accountability for their direct role in the torture of Abu Ghraib prisoners. Highlighting this point, CCR lawyer Katherine Gallagher noted that, “there remains an accountability gap: military officers were court-martialed for their misconduct, but the private contractors walked away with large payments, and they continue to be awarded millions of dollars in government contracts. This case hopefully will narrow that accountability gap.”

CACI’s involvement in Iraq began in 2003 after the US military asked them to provide intelligence assistance. Within two years of operating in Iraq, they were involved as defendants in lawsuits accusing them of ordering and overseeing torture. Despite this fact, and prior to concluding investigations on the torture scandal at Abu Ghraib, the US government offered CACI an extension of their contract in the amount of 23 million dollars – accountability for torture, after all, is limited, conditional, and sometimes rewarded for making bolder, the discourse and infrastructure that sustains abuse in the war on terror.

Charles Graner and Ivan Frederick, the two military police members who were convicted of charges related to the abuse of Abu Ghraib prisoners specifically named CACI contractors Daniel Johnson and Steven Stefanowicz as ordering various types of abuse of prisoners.

Despite these allegations, CACI whose tagline is ironically, “ever vigilant,” claimed not to know who exactly among their contractors were stationed at Abu Ghraib at the time of the infamous scandal and had done nothing in the way of uncovering this information. However, CCR argued – and the judge agreed, that only a handful of contractors – those working at Abu Ghraib’s “hard site” at the time of the plaintiffs’ abuse, needed to be questioned.

While underscoring CACI’s role in torture was key to this case, so too was the designation of the acts of abuse as torture – something CACI denies. In their motion to dismiss the case, CACI conceded that the treatment of prisoners was “deplorable”, and “undoubtedly humiliating”, but resisted the label of torture.

Though their obvious interest is in absolving themselves of responsibility, their narrative has become all too familiar in the course of the war on terror and in the treatment of Muslim prisoners. Torture is allowed to thrive not only because it is directed at Muslims, but because it must rise to the most egregious levels of abuse to be considered as such.

The Center for Constitutional Rights, rejected CACI’s argument on torture – not only dismissing their discussion that individual tactics of abuse cannot constitute torture, but also critiquing the notion that what the plaintiffs endured – among other things being punched, slapped, kicked, doused with hot water, forced into stress position for hours, threatened with dogs, stepped on, etc over protracted periods of time, did not have a cumulative impact amounting to torture and subsequent trauma.

“This is the first time a court has effectively conceded that there’s sufficient evidence that these Abu Ghraib detainees endured torture or cruel, degrading and in­humane treatment,” CCR lawyer Baher Azmy stated after the hearing Friday and Judge Brinkema’s decision to allow the case to proceed.

This case paves a promising path for addressing and challenging torture of Muslim prisoners in the war on terror. However, what we must continue to remember is that torture has and continues to be sanctioned by the US government. A positive ruling in subsequent hearings will not change this fact.

This is especially the case when the public narrative continues to be mired with discourse suggesting that torture works as Trump stated earlier this year or his condoning of torture in response to the Brussels attack back in 2016. In other words, the US has not reckoned with torture and far from that – continues to find ways to justify its insidious and overt legal re-entry. However, this case as Azmy noted, sent “an important message that there can be accountability for torture, a vital step for our clients who have yet to see justice. This is a crucial ruling in a political climate where Trump has called for bringing back widely denounced torture techniques like waterboarding.”

Abu Ghraib prison was closed in 2014 due to security concerns. But its horrendous legacy lives on. This case brings us one step closer to the possibility of closing the chapter on abuses at Abu Ghraib – but this relies on the full execution of justice that is not limited simply to prosecuting perpetrators of torture, but which extends to survivors of torture such that they are able to finally, albeit incompletely, move on with their lives. Without this, justice is a mere public performance to reclaim our sense moral ground, not a real, intentional commitment to restoring the lives of those we’ve harmed. But perhaps this is what American justice is really all about.