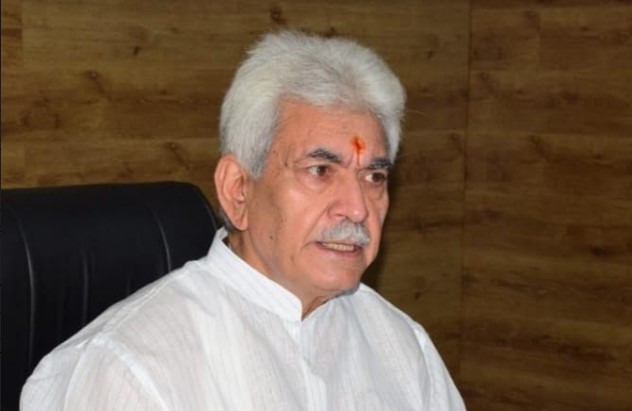 Jammu, April 17: Lieutenant Governor Manoj Sinha, in this month’s “Awaam ki Awaaz” programme shared the motivational and inspiring stories of the UT’s Change-makers, who are rendering selfless service to the society.

The Lt Governor also acknowledged and appreciated the invaluable suggestions and ideas received from the citizens and assured objective actions on the same.

During the latest episode of the radio programme, the Lt Governor called upon the people to play their important role and complement government’s efforts toward building a developed and prosperous new Jammu & Kashmir.

We are committed to the welfare of the poor, the marginalized and the vulnerable sections of the society, said the Lt Governor

Lauding the spirit of countless citizens who have dedicated themselves to the service of others, the Lt Governor made a special mention of Vaidya Shri R.C Nagar from Udhampur.

He highlighted how the 98-year-old shines as a beacon of hope for the elderly by running an Ayurvedic Medicine, Yoga and Physiotherapy Center for his peers, besides establishing a Senior Citizen Home and a Bal Ashram for orphans.

Noting that the government is according the highest priority to senior citizens’ care and wellbeing, the Lt Governor said that the UT administration has ensured dedicated Geriatric and Palliative Care facilities in all the districts. Also, specific instructions have been issued to the Social Welfare Department to achieve saturation of benefits under old-age pension schemes and other welfare programs for our elderly, he added.

On the occasion, the Lt Governor also highlighted the impressive stories of Sunita Devi, Sadaf Yusuf and Mehak Sharma, who are driving great positive change and exuding confidence in the society with their immense contributions.

The Lt Governor conveyed his heartfelt appreciation to them and the countless other women who with their selfless service and strong will-power have achieved great strides in furthering peace, prosperity and social cooperation.

‘Our daughter Sadaf Yusuf from Anantnag, who is an IT graduate is working for women empowerment and making efforts to improve the quality of life of the women folk belonging to the deprived sections of the society. During the Covid pandemic, Sadaf had selflessly served the women, elders and students through tele-counselling. In collaboration with the Social Welfare Department, she is working on Health and Hygiene awareness programmes in the remote areas of Anantnag’, the Lt Governor said.

Mentioning about Sunita Devi, a resident of Balargi village of Rajouri, the Lt Governor observed that despite facing numerous challenges, she brought about a positive change in her life through UMEED Self Group and then went on to start a school for children from far-flung areas. Her efforts in arranging transportation for the children who are unable to attend school due to difficult topography deserve all the praise, the Lt Governor added.

Terming Mehak Sharma of Reasi’s Shapanu village as an inspiration for the women of Jammu and Kashmir, the Lt Governor said that her novel efforts of setting up a flourishing dairy business have brought great change as it has encouraged other women from her village and nearby areas to replicate the idea.

The Lt Governor underlined the need to make continuous efforts toward women empowerment. He said that the UT government through its policy reforms and intuitive handholding schemes will usher in notable changes in the socio-economic and educational status of women in Jammu and Kashmir at a fast pace.

We are determined to establish an egalitarian society where every citizen gets the benefits of the prosperity of Jammu and Kashmir, he further added.

Referring to an insight received from Vikas Sharma of Ramnagar regarding the provision of toilet facilities on the Highways, the Lt Governor noted that the suggestion accords well with our commitment to the construction of highway rest places and toilets.

While sharing another suggestion from Srinagar’s Mehreen Altaf pertaining to the promotion and strengthening of Village and Cottage industries, the Lt Governor observed the Village and Cottage industries have been the backbone of the rural economy and highlighted the reforms introduced by the government for bringing a new revolution in the said sector.

The Lt Governor recalled that working with the vision of good governance and inclusive development of the Hon’ble Prime Minister Shri Narendra Modi, many steps have been taken in the last one and a half years to increase the employment venues and income of the people in this sector.

Last year itself, the Karkhandar Scheme aimed at providing financial support and up skilling of artisans was started which has given a lot of impetus to the rural and cottage industries related to handicrafts. Apart from this, various rural and cottage industries are also being promoted through Khadi Village Industries Commission, Khadi Village Industries Board and Rural Livelihood Mission.

In the last one year, 3254 projects were assisted by the Khadi Village Industries Commission, which directly provided employment to 26,281 people. Similarly, the Khadi Village Industries Board had worked on 8500 different projects in a year and about 46,000 people were directly benefitted by providing financial assistance of Rs 190 crore. In addition to this, the Directorate of Industries of Jammu, and Kashmir Divisions have extended financial assistance of Rs 131 crore to 6299 projects and about 15,000 people engaged in small businesses got direct benefits.

To summarize, the lives of 88,170 people have been positively affected by giving benefit of Rs 386 crore under just one scheme. Instructions have already been issued to set up clusters of rural and cottage industries under SFURTI, on which work is going on at a fast pace. So far, 08 clusters have been created in the UT, the Lt Governor added.

The Lt Governor mentioned about the suggestion of Pankaj Atri from Vijaypur, Samba who has highlighted the need to transform the landscape of our society, by assigning dedicated spaces for the purpose of ushering youth related measures and progressive steps.

On this, the Lt Governor observed that the Youths have been the focal point of UT’s developmental agenda and Mission Youth and many new platforms of self-employment, empowerment are already helping youth to realize their true potential.

The Lt Governor also mentioned about taking Centre for District Youth Training & Empowerment(C-DYTE) to the block level to extend facilities for exam preparation, availability of necessary books, mentors, sports and physical training at these centres to the students so that more and more youths can prepare for competitive examinations. Similarly, Youth Clubs have been established in all 4290 Panchayats, acting as nerve centres of information flow among the youth, he added.

The Lt Governor appreciated Pankaj’s suggestion regarding establishing “Student Farms” to give hands on technical training to students in agriculture & horticulture practices in every district and assured that instructions will be issued to the relevant departments for inclusion of the same in the vocational training.

The Lt Governor also mentioned the suggestions received from Sourav Sharma from Samba, Aasief from Shopian, regarding Clean Campus, Safe Campus to prevent drug addiction and curtaining the spread of leaf miner pests respectively and conveyed his acknowledgment regarding immediate action on the issues.

Referring to the letter from Kulgam’s Ehsaan Khaleeq highlighting the advantages of the recently announced pilot project of creating ‘Special Women Cells’ in 10 districts and calling for its extension to all the districts of UT, the Lt Governor called for collaborative efforts to end violence against women and linking all such special cells with self-help groups. He also assured relevant action about the plausible suggestion.

On the occasion, the Lt Governor also observed that Hon’ble Prime Minister Shri Narendra Modi is coming to Jammu Kashmir this month on the occasion of Panchayati Raj Day to share the resolve of the Government of India to establish ‘Gram Swaraj’ across the country.

I hope that on this historic occasion, the peoples’ representatives of all 4290 Panchayats of Jammu and Kashmir and every citizen will reiterate their commitment to walk on the path of self-reliance, development and peace, added the Lt Governor.