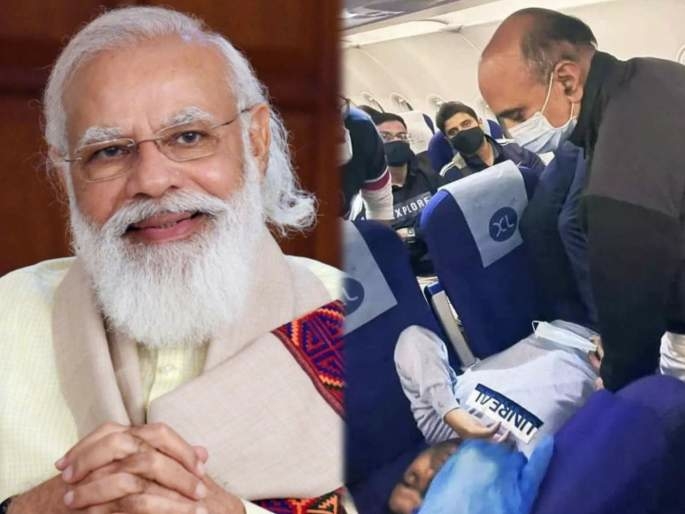 New Delhi: For a change, union Union minister Dr. Bhagwat Karad doffed his khadi and donned an apron to treat a fellow flier on board an IndiGo flight from Delhi to Mumbai last night.

Dr. Bhagwat Karad, who is a doctor by profession, won applause from Prime Minister Narendra Modi on Tuesday.

Dr. Karad, a Minister of State for Finance, was aboard an IndiGo flight from Delhi to Mumbai last night when a fellow flier complained of giddiness. The minister stepped in and helped out the passenger.

Pictures shared by news agency ANI showed the patient stretched out across a row of seats with the minister watching over them. “The patient was sweating profusely and had low BP,” Karad told ANI, adding that the passenger felt better after he was administered glucose.

Retweeting a post by IndiGo airlines, lauding the Union Minister for his timely intervention, Prime Minister Modi tweeted, “A doctor at heart, always! Great gesture by my colleague @DrBhagwatKarad.”

Appreciating the minister’s gesture, IndiGo tweeted, “Our heartfelt gratitude and sincere appreciation towards MoS for ministering to his duties non-stop! @DrBhagwatKarad your voluntary support for helping out a fellow passenger is ever so inspiring.”

A Rajya Sabha member from Maharashtra, Dr. Karad is a surgeon. He also owns a hospital in Aurangabad and has served in several medical positions. Before his election to the Upper House, he served as mayor for Aurangabad.