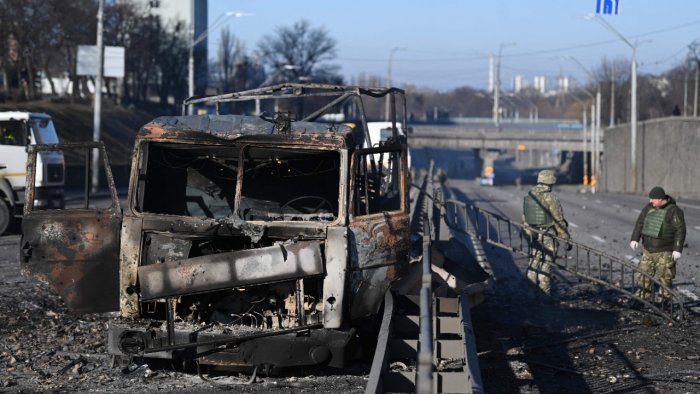 Ukraine has unleashed a new wave of psychological warfare by launching a website to help Russian families track down soldiers killed or captured during Moscow’s invasion.

`200rf.com’ contains photos and videos, some of them graphic, about soldiers who Ukraine claims are Russian soldiers captured by its forces. The website in the Russian language has posted pictures of blindfolded and injured soldiers giving statements on camera.

“This site was created by representatives of the Ministry of Internal Affairs of Ukraine. On it, you will find information about captured and killed Russian soldiers in Ukraine since the beginning of the occupation. Here we will promptly post photos and videos that we receive from the battlefield. If your relatives or friends are in Ukraine and participate in the war against our people – here you can get information about their fate. Unfortunately, it is difficult to identify a lot of those killed. We deliberately post these photos and videos, you may recognize someone by indirect signs,” read the English translation of the description on the website.

Viktor Andrusiv, an adviser to the Interior Minister, also posted his video on the site. “I know that many Russians are worried about how and where their children, sons, husbands are and what is happening to them — so we decided to put this online so that each of you could search for your loved one who Putin sent to fight in Ukraine,” he said.

Andrusiv said that over the past three days Ukrainian forces had captured almost 200 Russian soldiers. He put the death toll of Russian troops at over 3000.

“We have documents, photos, and videos of all of these people,” Andrusiv said.

The name of the site references the well-known term Gruz-200 (Cargo-200) that was used by the Soviet military for corpses being flown back from the war in Afghanistan in the 1980s.

Russia’s defence ministry has so far given no details of any military losses in Ukraine since launching a multi-pronged attack Putin called a “special operation” to protect two separatist regions.

The head of the North Caucasus region of Dagestan, Sergei Melikov, on Saturday became the first official to report the death of a Russian soldier in Ukraine.

He posted a tribute on his official Instagram page, paying homage to an officer he said had been killed during the “special operation to defend Donbas.”

The Kremlin has launched a major propaganda campaign to control coverage of the war in Ukraine and has ordered media to use only Russia’s official versions of events.

Moscow has long been accused of covering up losses suffered by its forces as they backed pro-Russian separatists in Ukraine and fought in Syria.

Lev Shlosberg, a prominent liberal politician, has suggested Russia’s military was using mobile crematoriums to destroy evidence of those killed in Ukraine.

“There is no war. No dead. No tombs. People will just be no more. Forever,” he wrote on his blog.