16 migrant workers run over by train in Maharashtra, had slept on tracks after 35 km walk 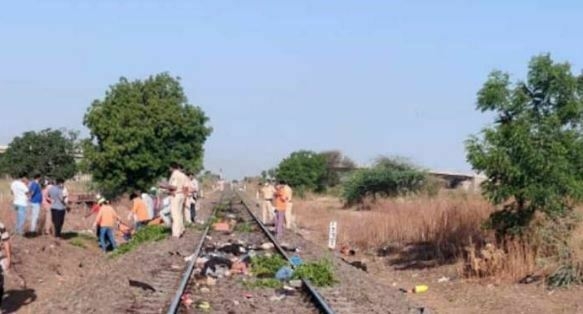 New Delhi: Sixteen migrant labourers were crushed to death early on Friday by a goods train in Maharashtra after they fell asleep on the tracks.

The accident happened between Jalna and Aurangabad in the Nanded Division of South Central Railway in Karmad police station area of the Aurangabad district.

The migrant labourers, who had been walking for several kilometres, were sleeping on the rail tracks when the mishap occurred, the railway officials said.

According to railway officials, the workers were walking towards their home state Madhya Pradesh after they lost their jobs due to the Covid-19 lockdown. Most public transportation has already been cancelled due to the lockdown.

These workers had started from Jalna to go to Bhusawal (both in Maharashtra) – a distance of 157 kilometres – and had planned to go to their native places Umariya and Shahdol in Madhya Pradesh, which is about 850 kilometres away.

According to railways, they left Jalna at 7 pm on Thursday and initially walked on road and later onto the track towards Aurangabad. After walking for about 36 kilometres, these workers started feeling tired and sat on the track between Karnad and Badnapur railway stations for taking some rest. They gradually went into deep sleep.

It was at 5.22 am that the approaching goods train ran over these labourers, the railways ministry said in a statement. The driver tried to stop the train but couldn’t do so in time, it added.

Prime Minister Narendra Modi said he is anguished by the loss of lives in the Maharashtra train accident.

“Extremely anguished by the loss of lives due to the rail accident in Aurangabad, Maharashtra. Have spoken to Railway Minister Shri Piyush Goyal and he is closely monitoring the situation. All possible assistance required is being provided,” PM Modi tweeted on Friday.

Condoling the deaths of the workers, Congress leader Rahul Gandhi said that he is shocked by the news.

“I am shocked at the news of migrant labourers being crushed to death by a goods train. We should be ashamed at the treatment meted out to the builders of our nation. My condolences to the families of those killed and I pray for the early recovery of the injured,” Gandhi tweeted in Hindi.

Railway Minister Piyush Goyal too expressed grief and said relief work is underway and an inquiry has been ordered.