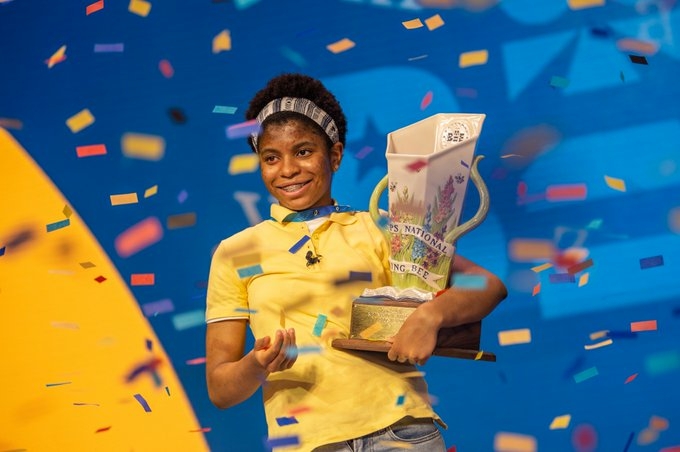 Zaila Avant-garde, a 14-year-old basketball prodigy, has won the 2021 Scripps National Spelling Bee, becoming the first African-American contestant to win in 93 editions of the prestigious competition.

Indian-Americans, who have been dominating the National Spelling Bee for years, had to be satisfied with the 2nd and 3rd positions. Chaitra Thummala, a 12-year-old from San Francisco and Bhavana Madini, 13, from New York won the second and third place at the keenly-fought competition, which was attended by US First Lady Jill Biden.

Avant-garde correctly spelt “Murraya”- a genus of tropical Asiatic and Australian trees having pinnate leaves and flowers to win the competition and USD 50,000 prize money on Thursday.

“It was the smile and twirls for us! After tying for 370th place in 2019, #Speller133 Zaila Avant-garde wins the 2021 Scripps National Spelling Bee. Congrats to all of our spellers. We”re proud of everyone’s poise and courage in facing the dictionary. #SpellingBee #TheBeeIsBack,” Scripps National Spelling Bee tweeted after the competition, which was not held last year due to the raging COVID-19 pandemic.

Avant-garde outlasted a field of 11 finalists, including Indian-Americans, to win the 2021 Scripps National Spelling Bee title and the first-place prize of USD 50,000 at the ESPN Wide World of Sports Complex in Orlando, Florida.

The 8th-grader also became the first Louisiana resident and the first African-American to win the title in the competition’s 93-year history.

The only Black winner before was Jody-Anne Maxwell, representing Jamaica in 1998, CNN reported.

A basketball prodigy, Avant-garde holds three Guinness World Records for her ability to dribble multiple basketballs at a time.

She hopes to one day play in the Women’s National Basketball Association.

Avant-garde previously competed in 2019, according to her bio on the bee’s website.

She is an avid reader who demonstrated a strong interest in words from a very early age. Beyond her love for words and language, she enjoys learning new things, playing basketball, listening to music and podcasts, and hanging out with her family, it said.

The National Bee is a high-profile, high-pressure endurance test as much as a nerd spelling match and spellers spend months preparing for it.

Over the past 20 years, Indian-Americans have been dominating the Spelling Bee contest even though they comprise only about 1 per cent of the US population.

It was the first time since 2008 that at least one champion or co-champion of the Scripps National Spelling Bee was not of South Asian descent, the Associated Press reported.

The Bee was cancelled in 2020 – for the first time since World War II – due to the coronavirus pandemic. But there were eight co-champions in 2019, seven of whom were Indian-Americans, bringing the total number of Indian-American champions since 1999 to 26.