129 dead in riot, stampede at football match in Indonesia 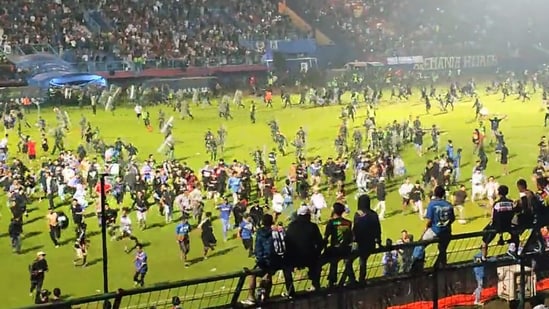 At least 129 people were killed and 180 people sustained injuries after a crowd stampede during a riot in Indonesia’s East Java province overnight, Reuters reported quoting police. A clash broke out between supporters of Javanese clubs Arema and Persebaya Surabaya after the former were defeated at the match in Malang Regency, East Java.

East Java police chief Nico Afinta said in a statement on Sunday: “In the incident, 129 people died, two of whom are police officers. 34 people died inside the stadium and the rest died in hospital.”

“It had gotten anarchic. They started attacking officers, they damaged cars,” Nico told Reuters, adding that the crush occurred when fans fled for an exit gate.

Fighting reportedly started when thousands of Arema fans rushed into the field after their team lost. Supporters from the Arema team had invaded the pitch and police had to fire tear gas which triggered a stampede and suffocation, East Java police chief Nico Afinta told reporters.

Video footage posted on social media showed people rushing onto the pitch in the stadium in Malang and images of body bags. Meanwhile, Indonesia’s sports minister Zainudin Amali told Reuters that authorities would re-evaluate safety at football matches and consider not allowing spectators after stampede killed 127 people. “The Indonesian top league BRI Liga 1 has suspended games for a week following the match that Persebaya won 3-2 and an investigation had been launched, ” Football Association of Indonesia (PSSI) said in a statement.
Expressing regret over the incident, Indonesia’s football association (PSSI) said a team has left for Malang to start an investigation into what happened after the game.

“PSSI regrets the actions of Arema supporters at the Kanjuruhan Stadium. We are sorry and apologize to the families of the victims and all parties for the incident. For that PSSI immediately formed an investigation team and immediately left for Malang,” the statement read.

Indonesia’s human rights commission will now probe security at the ground, including the use of tear gas.