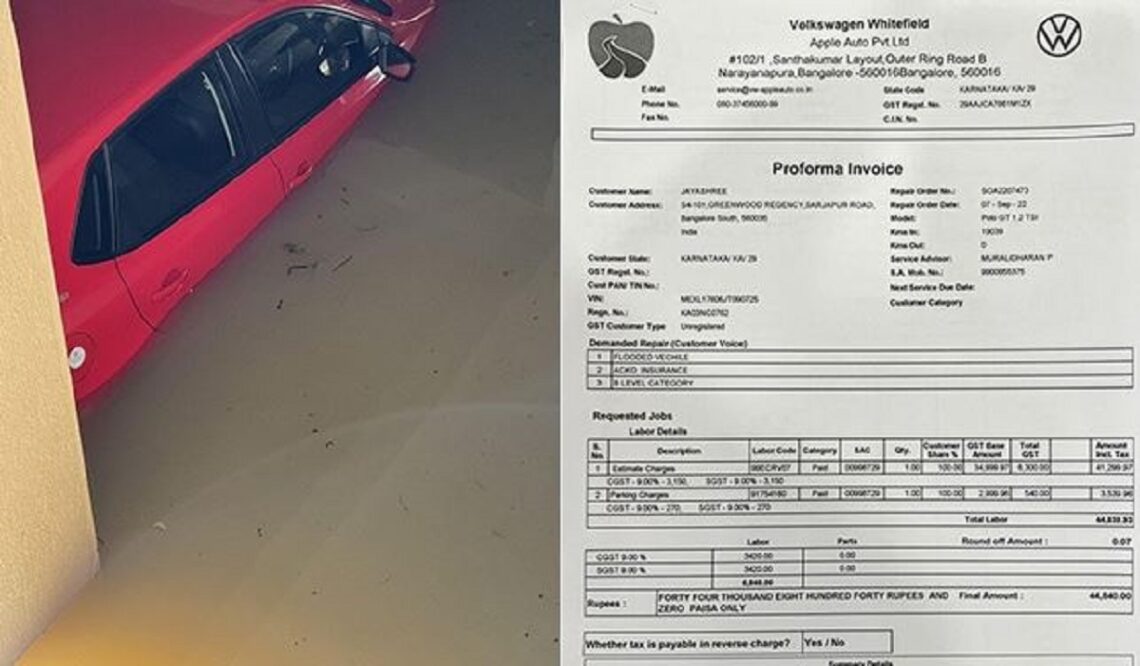 In a strange incident, a vehicle owner in Bengaluru was handed out an estimate of Rs 22 lakh by a service centre to repair a Volkswagen Polo hatchback that cost him Rs 11 lakh.

Taking to LinkedIn, Anirudh Ganesh, product manager at Amazon, shared his ordeal. He said that his car got damaged in the recent flooding in Bengaluru. It got fully submerged in flood waters, following which he sent his vehicle to Volkswagen Apple Auto in Whitefield.

“I had to push my car onto a towing truck in waist-deep water at 11 pm. No one to help but we middle-class people are tough. Karlete hai kisi tarah,” Ganesh wrote on LinkedIn.

However, he said that his nightmare was far from over as after approximately 20 days, the service centre sent him a repair estimate of Rs 22 lakh. Ganesh then got in touch with his insurance provider, Acko, who informed him that the car would be written off as a total loss and that they would pick it up from the repair shop.

But much to his astonishment, the service centre asked him to pay Rs 44,840 to collect his vehicle from them. The Volkswagen repair shop told Ganesh that this fee was required to issue documents about the damage the car has suffered.

Thankfully though, Volkswagen resolved the issue after another email sent by Ganesh. The company decided to settle the repair costs at Rs 5,000.

“Volkswagen India team (Mr.Sumanth and Ms.Poonam) have spoken and said that prices in such scenario will be set to the upper limit of Rs.5000 for estimation/storage for car owners in total loss cases. I hope this information helps everyone,” Mr Ganesh added. He also said that he finally got his car back on September 26.

“The dealership ensured the same price to all other customers as well and as per my understanding, VW is charging the same across Bangalore now,” Ganesh wrote on LinkedIn.

Meanwhile, reacting to his post, several internet users criticised the service centre for exploiting customers. “How can you charge an estimation fee? I mean how can I decide if I want to go ahead or not without estimate? And isn’t it something you are doing for your business???” wrote one user. “This is scary. Crony capitalism has no respect towards consumer protection?” added another.