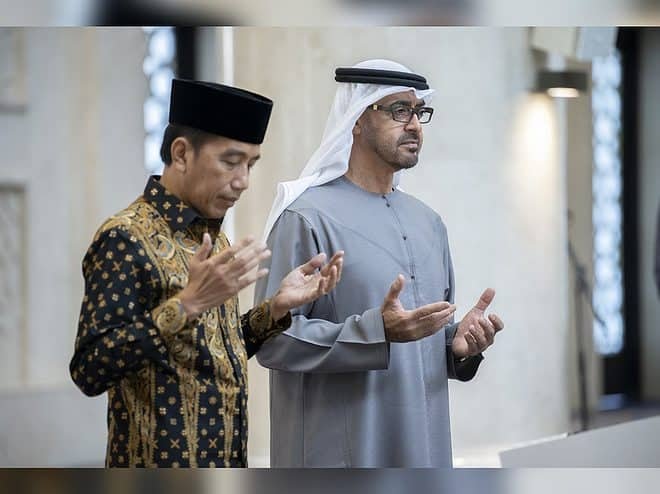 The mosque accommodates 10,000 worshipers and contains 56 domes and 4 minarets, along with 32 columns in the main prayer area.

The mosque is a copy of the Sheikh Zayed Grand Mosque in Abu Dhabi, with the addition of some traditional Indonesian designs, decorations, and the use of local materials.

The two presidents performed two rak’ahs of greeting the mosque in the mosque, then signed the commemorative plaque for the opening, which will be hung in the mihrab.

In a tweet, the Emirati president expressed his happiness at the opening of the Sheikh Zayed Mosque, pointing out that it is an initiative that expresses the meanings of interdependence, love, and cooperation for the good that Sheikh Zayed, may God have mercy on him, embodied.

“I was pleased to join President Joko Widodo in Solo, Indonesia to inaugurate the Sheikh Zayed Grand Mosque. Named in honor of the UAE’s Founding Father, the Mosque represents his values of peace and goodwill, reflecting the longstanding ties that exist between our two countries,” Sheikh Mohamed tweeted.

For his part, Joko Widodo said the Sheikh Zayed Grand Mosque in Solo “will become a place of prayer, a center for Islamic studies, and a religious tourism destination.”

He thanked the UAE for the “exceptional monument” that reflected the deeply-rooted relations and common values between both countries.

Opened in 2007, the Sheikh Zayed Grand Mosque in Abu Dhabi is one of the largest mosques in the world and an architectural icon that combines Islamic architecture and design. It is also a major tourist destination in the capital.