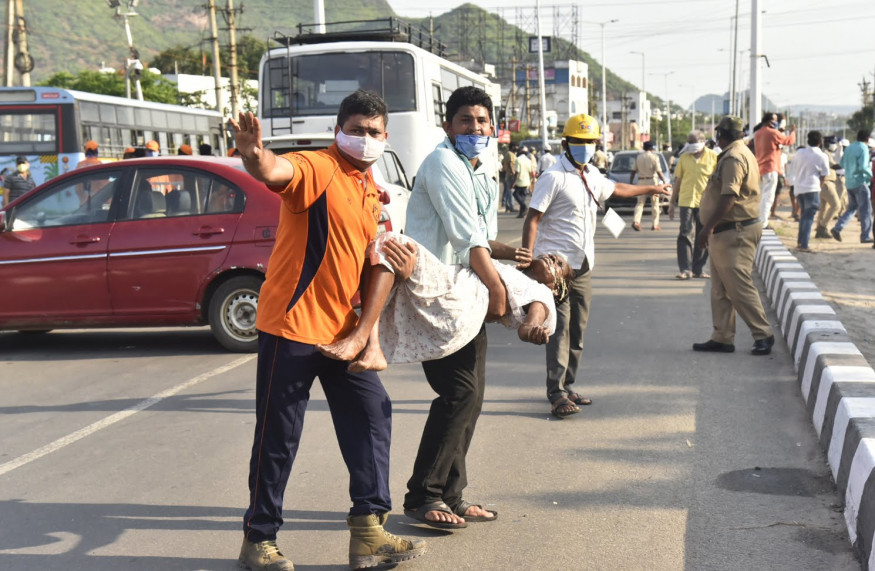 Visakhapatnam:  At least 10 people, including a child, were killed and over 800 hospitalised after a major gas leak at a polymer plant in Andhra Pradesh’s Visakhapatnam in the wee hours of Thursday, reports said.

The leakage caused illness to hundreds in about 20 villages in a five kilometre range around it.

The Vizag factory was trying to open post lockdown when the incident occurred, DG NDRF told CNN-News18. Several people were taken to hospital after they complained of a burning sensation in their eyes and breathing difficulties.

Footages of the incident show people lying on Vizag’s roads near the site, possibly unconscious. Many are being carried into ambulances, and people rushing in to help. An industrial siren sounds in the background, amid a heartbreaking scene of a child trying to wake up a woman lying unconscious on the divider.

Andhra Pradesh DGP Damodar Goutam Sawang said a detailed probe in to the incident will be carried out.

“Right now gas has been neutralised. One of the antidote is drinking a lot of water. Around 800 were shifted to hospital, many have been discharged. Investigation will be carried out to see how this happened.”

A representative of LG polymers said the leak took place when the company was preparing to commence operations from Thursday after more than 40 days of lockdown during which operations were suspended. The company mostly succeeded in controlling the gas leak by around 9am, he said.
Some ambulance staff, who were on the job of shifting affected people to hospitals, also fell ill, suffocated by the gas, which is believed to be synthetic chemical styrene.

Prime Minister Narendra Modi called an emergency meeting of the NDMA and Union Home Minister Amit Shah said the situation was “disturbing” and that his ministry was continuously and closely monitoring it.

Television pictures showed dozens of cattle in the sheds and farms of these villages lying either dead or unconscious. An NDRF team swung into action to evacuate the people from the villages and colonies around the factory to safer locations.

Finding it suffocating to breath at around 3am, hundreds of people began to come out of homes in search of safer places, police said, adding that efforts were also on to break open several houses to bring out elderly and children who fell unconscious.