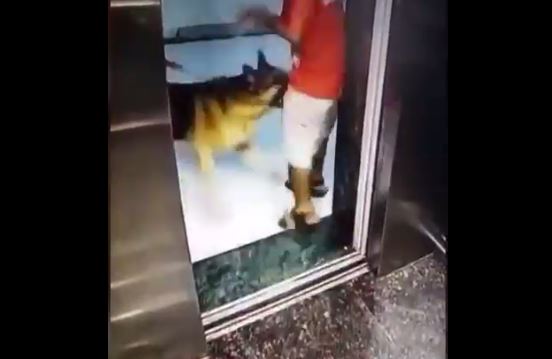 In yet another shocking video coming from a high-end society in Panvel, Maharashtra, a Zomato man was seen getting bitten by a pet dog outside a life. The poor man was seen crying in pain. He was bleeding as the dog bit near his testicles.

“Nowadays, in the society, people consider keeping a dog as their status symbol, while dog parents need to train the dog, when the dog is becoming aggressive, the parents themselves do not know, in this incident the private part of the delivery man was bitten,” wrote Twitter user Anu Khan while sharing the CCTV video.

In it the Zomato delivery man is seen leaving the lift but as soon as he exits, he is startled seeing a huge dog on a leash trying to enter the lift. The Zomato guy backs off as the owner pulls the dog away from the lift.

Assuming that he is safe, the Zomato guy leaves the lift but the dog returns ferociously attacking him and biting his left and scrotum in the process even as its owner (who is not in the frame) is seen pulling it away. Seonds later, the Zomato man is seen bleeding as cries in pain.

“I don’t know how I survived,” said the Zomato delivery person who was attacked by a pet German Shepherd near the lift at Indiabulls Greens Marigold CHS in Panvel on the evening of August 27. The victim, Narendra Periyar, 33, had just stepped out of the lift when the incident took place

This is the second such video going viral. Earlier this month, a boy was bitten by a pet dog inside a lift in Ghaziabad even as the owner of the dog, a lady, was seen ignoring the boy as if nothing had happened.