Ziaul Haq: The man to answer for a lot that went wrong with Pakistan 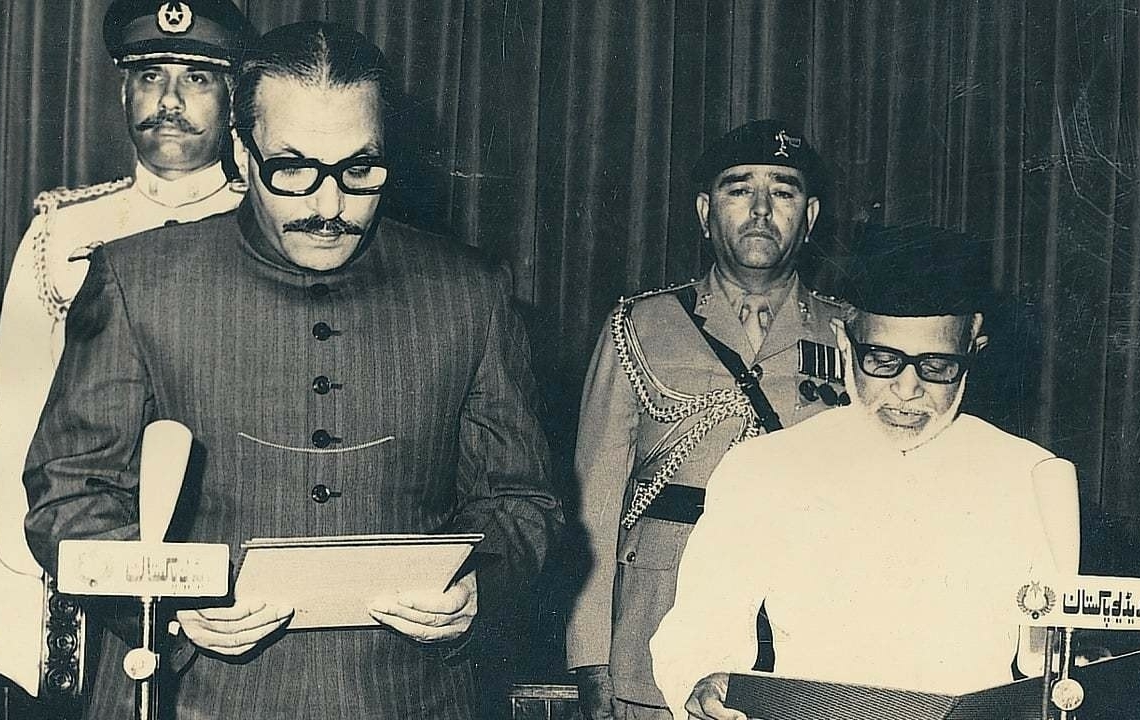 It is now generally agreed upon by most people that Ziaul Haq’s martial law changed Pakistan’s destiny for the worst. Most, but not all. A friend’s mother cried when Zia died because he prayed five times a day and was from the Arain clan, like her.

In Saba Imtiaz’s 2014 novel, Karachi, You’re Killing Me!, her protagonist quips: “If there is ever anything you can count on at Pakistani cultural events, it’s that Zia – dead for longer than most people can remember – can still be blamed for everything.” I share her scepticism.

I don’t believe in the Great Man Theory of history. I don’t believe individuals can single-handedly reshape the fate of millions. I believe great upheavals are caused by institutional and structural pressures and individuals only respond within a limited number of rationalised choices.

Whether Zia was there or not, there was going to be a conflict in Afghanistan between two opposing superpowers with assorted Saudi interests thrown in; the Iranian Revolution was going to happen anyway and bring sectarian violence in its wake; Pakistan’s third martial law was well in the making before he imposed it. Military dictatorships in Pakistan have a certain sense of fatalism about them. Habib Jalib, the people’s poet jailed multiple times by Zia for penning verses against his rule, once wrote: “Virsay mein humay yeh gham hai mila, iss gham ko naya kya likhna? (We’ve inherited this sad state of affairs, why write this sadness as something new?).”

Zia’s greatest legacy is said to be Islamisation but it had already taken root with the passage of the Objectives Resolution in 1949. The Council of Islamic Ideology, too, had been set up in 1962 by Ayub Khan. Zulfikar Ali Bhutto’s economic socialism had very clear Islamic overtones.

His efforts to unite Muslim countries were his major foreign policy initiatives. It was his 1973 Constitution that made Islamic Studies compulsory in schools. In 1974, Ahmadis were declared non-Muslims. In 1977, a federal law prohibited the sale of alcohol to Muslims. Even our nuclear programme was deemed to be making an Islamic bomb. The anti-Bhutto movement of 1977, too, used the demand for Nizam-e-Mustafa (the system of the Prophet of Islam) to replace Bhutto’s social democracy. All that was before Zia came along.

This historical determinism, however, does not absolve him of his tyranny and the havoc he wreaked on the Constitution, democracy and political parties. Things could have been different with another tyrant. To start with, there was nothing certain about Zia’s rise to the top. Bhutto bypassed seven senior lieutenant generals to make him army chief because he was deemed to be the most disinterested in politics. But as we now know, the army acts as an institution regardless of the individual heading it.

It is no secret that Zia lent heavily on Islam and ulema due to lack of popular support. Some of his concessions to ulema still haunt us to this day. The penal code was amended to add the death penalty as a punishment for blasphemy and increase the scope of what constitutes blasphemy. In 1979, he promulgated the Hudood Ordinances with punishments such as lashes for adultery. In 1980, he set up the Federal Shariat Court to hear appeals in cases under the Hudood Ordinances. In 1981, he set up a hand-picked consultative body, Majlis-e-Shoora, to act as the federal parliament. It was packed with ulema nominated by him. He also introduced mandatory zakat deduction from bank accounts, leading Shias to rise in violent protests.

By 1984, he was feeling so confident about the strength of his constituents – comprising ulema, spiritual leaders, business community and the military – that he decided to hold a referendum that asked if people wanted Islamic laws in the country and if their answer was to be yes then that automatically meant that they wanted Zia as the president of Pakistan for the next five years. Nobody came out to vote. “Marhoomeen shareek huay, sachchai ka chehlum tha (The dead participated, it was the 40th day of mourning for the death of truth),” Jalib said of the level of public participation in it.

The President General Mohammed Ziaul Haq administering the oath of office of the Chairman of Federal Shariat Court to Mr. Justice (Retd) Sallahuddin Ahmed on May 20, 1980 | White Star

In 1985, Zia brought in an elected Majlis-e-Shoora instead. The elections were held on non-party basis after a government-appointed commission declared that political parties were un-Islamic. The members of Majlis-e-Shoora were chosen presumably on the grounds of an election candidate being sadiq (truthful) and ameen (honest). These requirements were brought in as additions to articles 62 and 63 in the Constitution. The most well-known politician to come out of that exercise, Nawaz Sharif, was disqualified more than three decades later due to his failure to fulfil them.

Another gift of Zia’s era was the radicalisation of Islamabad’s Lal Masjid. Its prayer leader, Muhammad Abdullah, was close to the general before he became close to the Afghan Taliban’s chief Mullah Omar and senior al-Qaeda leaders. It took another military dictator two decades later to uproot the extremist influence from Lal Masjid in a bloody operation in 2007.

In hindsight, though, Islamisation seems more like political expediency than a well-thought-out system. His personal beliefs did not stop him from taking part in the Black September killings of Palestinians in Jordan where he was posted as a brigadier from 1967 to 1970. When he wanted Bhutto framed for murder he asked Mian Tufail Mohammad, then head of Jamaat-e-Islami (JI), to provide him with four people willing to testify that Bhutto paid them to kill a dissident politician. He promised Tufail, by one account swearing on the Quran, that these witnesses would be pardoned after Bhutto was hanged. They were hanged immediately after Zia had gotten rid of Bhutto. That is when JI distanced itself from him.

He once had his picture taken as he bicycled to his office from his home, demonstrating an austere and protocol-free way of life. What the press did not show the public (and it could not because of the draconian censorship rules it was subjected to) was that hundreds of security personnel had secured the route before Zia started pedalling his bicycle.

He introduced laws to socially and politically ostracise Ahmadis but then went on to give an official award to Professor Abdus Salam, an Ahmadi of Pakistani origin who had won the Nobel Prize in Physics.

Beyond his religious hypocrisy, his actual enduring legacy is his systematic decimation of parliamentary democracy. He introduced the Eighth Amendment to the Constitution of Pakistan in 1985 to protect his martial law from judicial review and acquire the power to sack an elected government and legislature on a whim — a power he exercised to dismiss the government of prime minister Muhammed Khan Junejo in 1988. The same amendment was subsequently used three times in the 1990s to remove democratic government’s midway through their tenures.

Zia’s crackdown on political dissidents and journalists resulted in the arrest of thousands of people. Many of them were incarcerated and tortured in the basements of Lahore Fort because the jails were all spilling over. Public floggings of criminals and political opponents were a routine affair and hangings were often projected widely in the media to scare people into submission.

Zia also banned student unions in 1984, much to the impoverishment of youth engagement with politics in general and political challenge against fascist forms of conservatism in particular. The effects of this repression were felt throughout the next two decades as political engagement among the urban, educated middle and upper-middle classes started going down and violent groups organised on non-political grounds of religion, sect and linguistic prejudice assumed massive firepower to deadly consequences.

Guns and drugs proliferated in his era. It was the age of Kalashnikovs and heroin. Automatic weapons, originally meant for Afghan mujahideen, were either smuggled into Pakistan or their replicas were produced in factories in tribal areas. Drugs produced in the border regions of Afghanistan and Pakistan were a major source of funding for the anti-Soviet warriors in Afghanistan. Illegal manufacturing and smuggling of both guns and drugs continue to this day in Pakistan. Then there were around five million Afghan refugees, many of whom came to settle here permanently. But, then again, the British-era Durand Line that separates the two countries can be blamed for all these problems as much as Zia.

Is he responsible for every ill that plagues Pakistan today? I remain sceptical though I must admit that I did not have to live through his dictatorship.