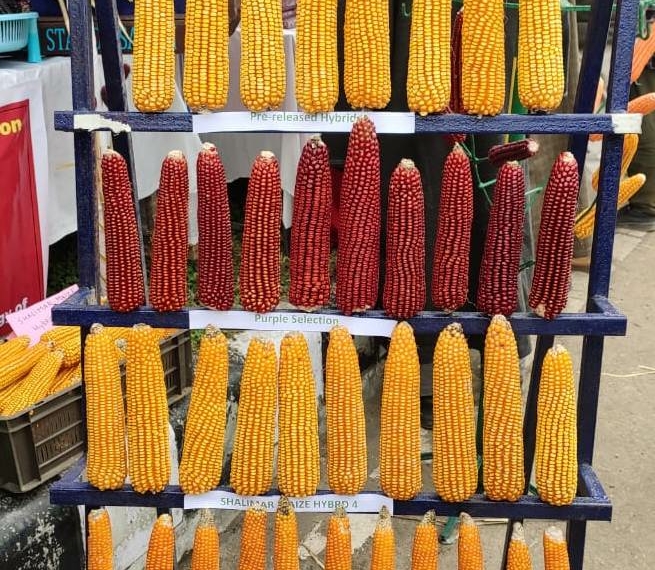 Srinagar: Have you ever eaten purple ‘makai weat’ (corn)?

Scientists at the Sher-e-Kashmir University of Agricultural Sciences & Technology, Kashmir (SKUAST-K) have grown different types of maize that besides the typical yellow color have white, light purple, and dark purple shades.

Associate Professor at the SKUAST-Kashmir Ajaz Ahmad Lone and Professor Z A Dar said the maize varieties developed by University were recommended for the Kashmir region and are grown as per the agro-ecology and altitude of a particular area.

The SKUAST scientist said though the yellow-colored maize with soft texture was preferred for roasting and boiling, some other types are good for feed and fodder.

“The white kernel types are usually used for making ‘atta’ /’sattu’ in the foothills of the valley,” he added.

Lone said Kashmir region had huge scope for the cultivation of sweet corn provided an excellent post-harvest system was put in place.

Interestingly, the Agriculture Department had recently roped in an expert team of ‘Gourmet Popcornica LLP’ to boost corn production in Jammu and Kashmir. The Gourmet  Popcornica team had been asked to conduct sample and soil testing in selected patches of land throughout the Union Territory.

After a meeting of the team with government officials, the authorities had said it would allot 25 acres of land each in the Jammu region and Kashmir valley for maize production.

“It was informed in the meeting that a total of 25 acres of land would be provided to find the viability of various kinds of maize in the Jammu region while equal area would be provided in Kashmir region for the purpose,” said an official.